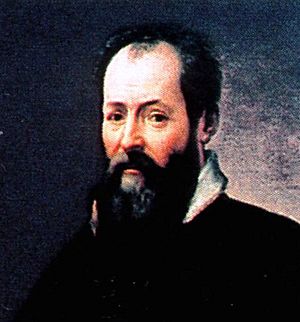 Giorgio Vasari, (1511–1574), was an Italian painter, architect and writer. He is most famous for his book "The Lives of the Great Architects, Painters and Sculptors of Italy", which is usually known as "Vasari's Lives". Although some other writers had written about art, this book, which was published in 1550 makes Vasari the first art historian.

Vasari was born in 1511 to a rich family in the city of Arezzo in Tuscany. When he was 13 he was sent to Florence to study at the workshops of the well-known artists Andrea del Sarto. Florence is so famous for the arts that students like Vasari have been going there to learn painting and sculpture, ever since Giotto in the 1200s. The two most famous artists in the world, Leonardo da Vinci and Michelangelo were both alive when Vasari was a boy and had both studied in Florence. Vasari had the good luck to meet Michelangelo, who was like a great hero to Vasari.

Vasari learnt well, and became one of the favourite artists of the Grand Duke Cosimo I of the Medici family who ruled Florence at that time. He did all sorts of important jobs for them. One of the most important buildings in the city was the Palazzo Vecchio (the "Old Palace") which was really a Medieval fortress, where the town council had always met. Vasari got the job of decorating the walls of the enormous meeting room with painted frescos.

Vasari was very good at directing important artistic jobs, but he was not really as good a painter as he was architect. One of his most important architectural jobs was to begin the building of the Uffizi (Offices) in Florence. These are two long buildings that face each other across a long narrow courtyard with one end opening on the town square, and the other end opening onto the Arno River. At the end where the river is, Vasari designed a beautiful "loggia" which is a sort of two-storey veranda that joins the two buildings. It makes the narrow courtyard and the view of the river look like a stage set where wonderful things might happen. The Uffizi is now one of the most famous art galleries in the world. 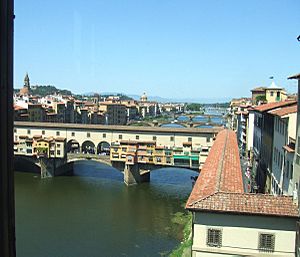 The Vasari Corridor crosses over the Ponte Vecchio.

Vasari had another important job for the Medici family. Eleanor, the wife of Duke Cosimo I, had bought a house. It was by far the biggest house in the city, and was across the river from the Uffizi. The Medici family was not always popular. The previous duke, Alessandro, had been murdered. So to keep the family safe, they needed an escape route from the Palazzo Vecchio to the Pitti Palace on the other side of the river. Vasari was expected to design it. The escape route is named after its designer. It is called the "Vasari Corridor".

The corridor begins at the Palazzo Vecchio and runs along the top floor of the Uffizi and across the loggia near the river, then it runs on top of arches along the street by the riverbank, above a nice covered walkway at street-level where nowadays people can buy souvenirs. The Vasari Corridor then gets to a bridge, the Ponte Vecchio. It is the oldest, most famous bridge in the city, and on both sides it had rows of shops and houses. But the Medici did not mind that! They just had anything that was in the way pulled down. When the Corridor gets to the other side of the river, it makes some twists and turns. Some buildings were knocked down to make way, but the Mannelli family who lived in a large tower were not so obliging and so the corridor is made to go around its walls. Eventually it gets to the Pitti Palace, which is an enormous building of brown stone, with big carved lions' heads beneath all the windows. Vasari built other buildings that are more beautiful, but the Vasari Corridor is probably his most famous. 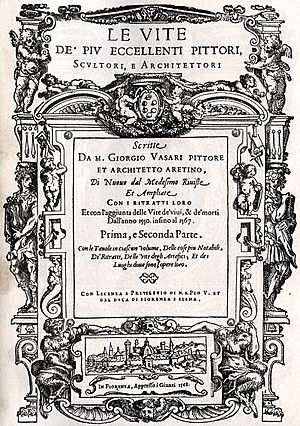 The front page of "Vasari's Lives"

Vasari's masterpiece is his book, "The Lives of the Great Architects, Painters and Sculptors of Italy", first published in 1550. It is a book of biography. It tells the stories of the lives of Italian artists from Giotto who lived around 1300 to Michelangelo who was still alive when Vasari was writing his book. For some of the artists, very little is known about them except the stories that Vasari heard and wrote in his book. Even though nowadays it is known that Vasari sometimes made mistakes, he gives a wonderful picture of the characters of the artists, and tells all sorts of amusing stories.

Vasari does not just tell the stories of the artists' lives. He also describes their artworks in great detail. It is because of Vasari that art historians know of many important artworks that have been lost. It is because of Vasari that we know that the Mona Lisa once had eyebrows. Vasari writes about the artworks as a history. He believed that the Gothic art of the Middle Ages was not as good as the art of Florence in the 15th century (1400s) and that Michelangelo, who painted in the early 16th century (1500s) was the greatest artist since the days of Ancient Greece. He believed that the change towards the great art of the Renaissance began with Giotto around 1300. Vasari puts all these ideas into his book and shows how one artist learnt from each other, and how the changes in art came about. "Vasari's Lives" is the first art history book that was ever written.

All content from Kiddle encyclopedia articles (including the article images and facts) can be freely used under Attribution-ShareAlike license, unless stated otherwise. Cite this article:
Giorgio Vasari Facts for Kids. Kiddle Encyclopedia.