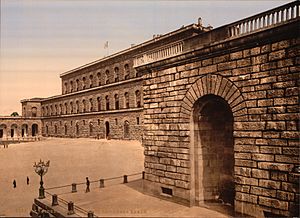 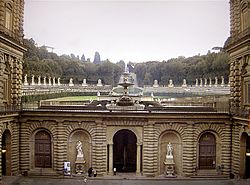 Palazzo Pitti (in English sometimes called the Pitti Palace) is a palace in Florence, Italy. It is from the Renaissance period. The palace was bought by the Medici family in 1549. It became the main home of the ruling families of the Grand Duchy of Tuscany. It was the centre of government for the 300 years that Tuscany was a monarchy. Later the palace was used as a base by Napoleon. During the Risorgimento, for a short time it was the royal palace of the newly united Italy.

The palace and its contents were given to the Italian people by King Victor Emmanuel III in 1919. Its doors were opened to the public as one of Florence's largest art galleries. It is the largest museum complex in Florence. It is divided into several main galleries or museums: the Palatine Gallery, the Royal Apartments, the Gallery of Modern Art, the Silver Museum, the Porcelain Museum, the Costume Gallery and the Carriages Museum.

Behind the Pitti palace there is the Boboli's Garden. It is a historical park visited every year by about 800,000 tourists. The park is famous for the beauty of the flowers and for the very old sculptures.

All content from Kiddle encyclopedia articles (including the article images and facts) can be freely used under Attribution-ShareAlike license, unless stated otherwise. Cite this article:
Palazzo Pitti Facts for Kids. Kiddle Encyclopedia.