House of Savoy facts for kids 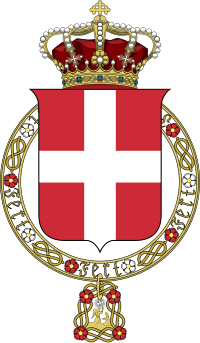 The coat of arms of the Savoy family while monarchs of Italy.

The House of Savoy was the ruling dynasty of the Duchy of Savoy, then the Kingdom of Sardinia and later Kingdom of Italy from 1861 to 1946.

The House of Savoy began in Switzerland in the Middle Ages. The Savoy rose to power in Sicily War of Spanish Succession then gave up Sicily for Sardinia in 1720 later adding Piedmont to their kingdom.

In 1792 they joined the alliance against Napoleon Bonaparte. They were defeated at first but had their kingdom restored after Napoleon was defeated.

After World War II, public support for the monarchy fell and Victor Emmanuel III abdicated in 1946. His son Umberto II was king for a month before a referendum abolished the monarchy. Today the leadership of the House of Savoy is contested between Victor Emmanuel, Prince of Naples, who is the son on Umberto II, and his cousin Prince Amedeo, Duke of Asota.

There was also a branch of the family that settled in France they were known as the Dukes of Nemours and often had close ties with the Court of Louis XIV.

All content from Kiddle encyclopedia articles (including the article images and facts) can be freely used under Attribution-ShareAlike license, unless stated otherwise. Cite this article:
House of Savoy Facts for Kids. Kiddle Encyclopedia.