Duke of Nemours facts for kids

The title of Duke of Nemours was originally given to a French family of minor nobility. It was originally a small lordship. It was later made a county in 1364. It is most famous for being held by a branch of the House of Savoy that eventually settled in France. Following the death of the last Savoyard duke (1659) the title went back to the crown of France. It was eventually passed on to the only brother of Louis XIV in 1672. It remained with his descendants. A son of King Louis Philippe of the French was given the title in 1850. 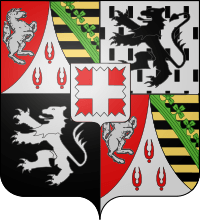 All content from Kiddle encyclopedia articles (including the article images and facts) can be freely used under Attribution-ShareAlike license, unless stated otherwise. Cite this article:
Duke of Nemours Facts for Kids. Kiddle Encyclopedia.