Francis I of France facts for kids 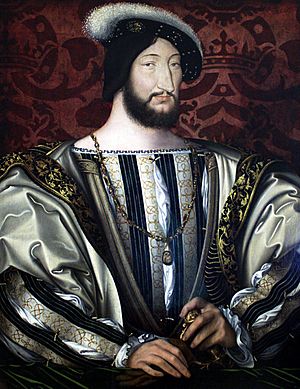 Francis was born in Cognac, France on September 12, 1494. His parents were Charles, Duke of Angoulême and Louise of Savoy.

Francis I married Claude of France on May 18, 1514. They had seven children, two died before turning eight, two died at the ages of eighteen to twenty-three. Those who lived to adulthood were:

Francis was very interested in art and liked the artist Leonardo da Vinci.

All content from Kiddle encyclopedia articles (including the article images and facts) can be freely used under Attribution-ShareAlike license, unless stated otherwise. Cite this article:
Francis I of France Facts for Kids. Kiddle Encyclopedia.