Rouen is a commune. It is the prefecture of Upper Normandy and the Seine-Maritime department. 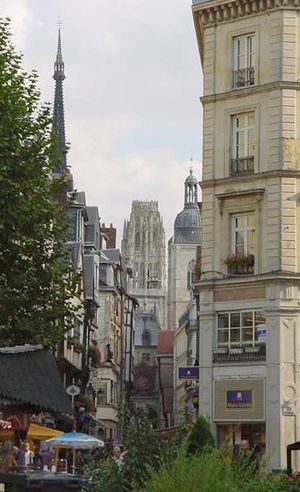 First settlements in that region were from the 6th century before Christ. The Romans founded Rotomagus about 100 A.D.. Since 384 Rouen is the seat of a bishop. In 841 the Vikings conquered Rouen. It became the capitol of the Duchy of Normandy. In 1204 the Frensh king reconquered Rouen. In 1419 the English crown (Henry IV. of England) conquered the city in the 100-year War between France and England. On May, 30th of 1431 Jeanne D'Arc (the Virgin of Orleans) was burned in Rouen. In 1494 the French got the city back. In 1834 the railway connection Paris-Rouen was opened. Rouen was occupied by the Germans in the Franco-German War of 1870 to 187373 and in both World Wars. In the World War II many buildings were destroyed.

Rouen has an oceanic climate (Cfb in the Koeppen climate classification). It has a great marine harbor 60 km from the city. Tourism, transportation, the colleges and the university are most important economic factors.

The university of Rouen has about 40,000 students.

All content from Kiddle encyclopedia articles (including the article images and facts) can be freely used under Attribution-ShareAlike license, unless stated otherwise. Cite this article:
Rouen Facts for Kids. Kiddle Encyclopedia.