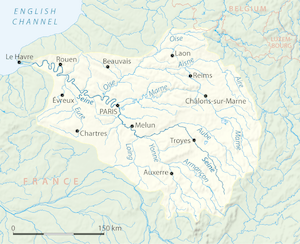 The Seine rises near Dijon in eastern central France, and flows through Paris and into the English Channel.

The Seine is a river in France. It flows into the English Channel between Le Havre and Honfleur. It is 777 kilometres (483 mi) long. It is the second-longest river in France. Other important cities along its course are Paris, Troyes and Rouen. Its drainage basin has a surface of 78,650 kilometres (48,870.84 mi). The Seine starts in Source-Seine, in Côte-d'Or, Bourgogne-Franche-Comté, at an height of 444 metres (1,457 ft). 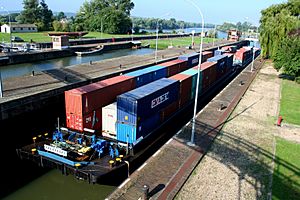 The lock at Poses-Amfreville is the first, coming from the sea

Between Rouen and the sea, ocean-going vessels of up to 280 metres (920 ft) in length, and 150,000 tons in weight can travel the Seine. This section of the river has a length of about 120 kilometres (75 mi). Ships of a draft of up to 10 metres (33 ft) can circulate. Draft is a word describe the height of the part of a ship that is below the water line. There are three bridges in this section. They can be raised. The maximum air draft (or height above the water line) of a ship is 50 metres (160 ft). Because there are few briges, the river can be crossed by ferry, at different locations. The port of Rouen is an important maritime port in France; it is the most important port in Europe for cereals, and the most important port in France for flour and fertilizers. Even if the port of Le Havre is more important for petroleum, that of Rouen is still important. About 25 million tons of produce is handled by the port of Rouen each year.

The port of Paris is the most important fluvial port in France: About 20.2 million tons of merchanise are handled each year, 20 miilon tons of this mechandise come from fluvial transport. There is a project called Seine–Nord Europe Canal, to build a high-capacity canal to connect the Paris region to the Ports of Antwerp, Dunkerque and Rotterdam, for large ships of a with of 11.5 metres (38 ft) width and 185 metres (607 ft) length.

The river has inspired different painters, mainly in the 19th and 20th century. Honoré de Balzac descibes it in many of his books. Gustave Flaubert uses the river as a metaphor or image to describe the flow of time. Other authors include Jacques Prévert, and Guillaume Apollinaire.

All content from Kiddle encyclopedia articles (including the article images and facts) can be freely used under Attribution-ShareAlike license, unless stated otherwise. Cite this article:
Seine Facts for Kids. Kiddle Encyclopedia.