Oscar-Claude Monet ( 14 November 1840 – 5 December 1926) was a founder of French Impressionist painting, and the most consistent and prolific practitioner of the movement's philosophy of expressing one's perceptions before nature, especially as applied to landscape painting.

The term "Impressionism" is derived from the title of his painting Impression, soleil levant (Impression, Sunrise), which was exhibited in 1874 in the first of the independent exhibitions mounted by Monet and his associates.

Monet's ambition of documenting the French countryside led him to adopt a method of painting the same scene many times in order to capture the changing of light and the passing of the seasons.

Monet was born in Paris, France. His father wanted him to help run the family's grocery business. However, Monet wanted to be an artist. When he was young he met the painter Eugène Boudin who taught him to use oil paints, and encouraged him to paint out of doors.

Monet joined the French Army in Algeria for two years from 1860-1862. When he became ill he left the army to study art at university. He did not like the way art was taught, and joined the painter Charles Gleyre in his studio. He met other artists here, including Pierre-Auguste Renoir and Alfred Sisley. They shared their ideas about painting.

On 1 April 1851, Monet entered Le Havre secondary school of the arts. Locals knew him well for his charcoal caricatures, which he would sell for ten to twenty francs.

In 1866 Monet had a child with Camille Doncieux, who had been his model. They married in 1870. In 1870 he moved to England to escape the Franco-Prussian War, and in 1871 he moved to Argenteuil near Paris where he painted some of his most famous pictures. In 1873 he painted Impression, Sunrise, showing the sea at Le Havre. When this picture was shown in 1874 one critic took its title and called the group of artists "Impressionists". He intended to make fun of the artists, but the name has stuck and this is what people today call this style of painting.

In 1879 Camille died of tuberculosis. Alice Hoschedé decided to help Monet by taking care of his children as well as her own. In 1883 they moved to a house in Giverny where Monet planted a large garden. Monet married Alice in 1892. 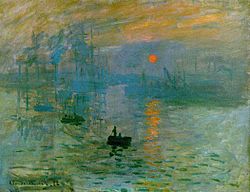 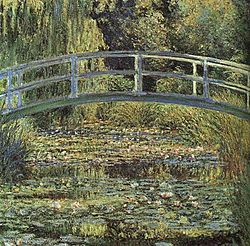 Waterlilies, painted by Monet in his garden at Giverny in 1899

Monet has been described as "the driving force behind Impressionism". Crucial to the art of the Impressionist painters was the understanding of the effects of light on the local colour of objects, and the effects of the juxtaposition of colours with each other. Monet's long career as a painter was spent in the pursuit of this aim.

Monet found that his garden inspired him to paint pictures of it, particularly the water lilies. Alice died in 1911, and his son Jean was killed in World War I in 1914.

Monet used broad brush strokes to build up his pictures, and painted quite quickly to try and get the idea of the light he could see into his paintings. If you go very close to one of his pictures it is hard to see what it shows, but if you stand back everything becomes clear.

Monet died of lung cancer on 5 December 1926 at the age of 86 and is buried in the Giverny church cemetery. Monet had insisted that the occasion be simple; thus only about fifty people attended the ceremony.

His home, garden, and waterlily pond were bequeathed by his son Michel, his only heir, to the French Academy of Fine Arts (part of the Institut de France) in 1966. Through the Fondation Claude Monet, the house and gardens were opened for visits in 1980, following restoration. In addition to souvenirs of Monet and other objects of his life, the house contains his collection of Japanese woodcut prints. The house and garden, along with the Museum of Impressionism, are major attractions in Giverny, which hosts tourists from all over the world.

All content from Kiddle encyclopedia articles (including the article images and facts) can be freely used under Attribution-ShareAlike license, unless stated otherwise. Cite this article:
Claude Monet Facts for Kids. Kiddle Encyclopedia.