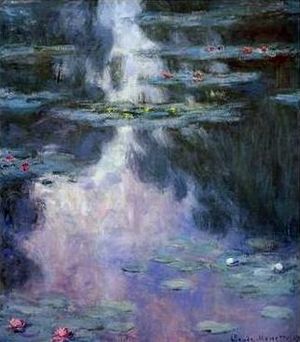 Water Lilies (or Nymphéas) is a series of about 250 oil paintings by French Impressionist Claude Monet. The paintings are of Monet's flower garden at Giverny. They were the main focus of Monet's work during the last thirty years of his life. Many of the works were painted while Monet suffered from cataracts. The paintings are on display in museums all over the world, including the Musée Marmottan Monet and the Musée d'Orsay in Paris, the Metropolitan Museum of Art in New York, the Art Institute of Chicago, the Carnegie Museum of Art and the National Museum of Wales, among others.

As part of his extensive gardening plans at Giverny, Monet had a pond dug in his garden and planted with lilies in 1893. He painted the subject in 1899, and thereafter it dominated his art. He worked continuously for more than twenty years on a large-scale decorative series, attempting to capture every observation, impression, and reflection of the flowers and water. The series captures the blooms at different times of the day, and under different atmospheric conditions. After much hesitation, Monet exhibited a group of 48 water-lily paintings in 1909 at the Paris gallery of his art dealer, Paul Durand-Ruel. The series became an enormous financial, popular, and critical hit. By the mid-1910s, Monet had achieved a completely new, fluid, and somewhat audacious style of painting in which the water-lily pond became the point of departure for an almost abstract art.

All content from Kiddle encyclopedia articles (including the article images and facts) can be freely used under Attribution-ShareAlike license, unless stated otherwise. Cite this article:
Water Lilies Facts for Kids. Kiddle Encyclopedia.