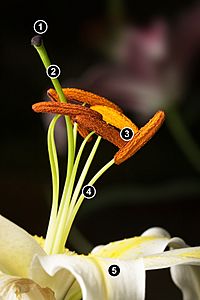 The lily is a genus of flowering plant. There are many species of lilies, like trumpet lilies and tiger lilies. They are usually quite tall, and are perennials.

Most lilies grow from a bulb, which in some species develops into a rhizome, which carries small bulbs.

Lilies grow in Europe, North America, and Asia. There are more than 100 species, and many cultivated varieties. They also come in various colours. It tends to grow wild in the forest and a grassy plain of a mountainous area, but several kinds grow wild on wet ground. A lily's petals come in multiples of three. The fleur de lys is a stylized depiction of the lily.

Some Lilium species are toxic to cats, especially Lilium longiflorum. The mechanism is not exactly known but it involves damage to the kidneys, which can cause acute renal failure. Veterinary help should be sought, as a matter of urgency, for any cat that is suspected of eating any part of a lily – including licking pollen that may have brushed onto its coat.

All content from Kiddle encyclopedia articles (including the article images and facts) can be freely used under Attribution-ShareAlike license, unless stated otherwise. Cite this article:
Lily Facts for Kids. Kiddle Encyclopedia.