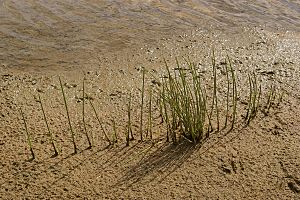 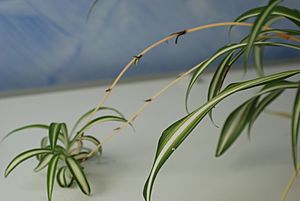 Small spider plants growing at the end of a stolon

Stolon is a term used often in botany. It describes a horizontal stem running across or just under the ground. A runner is a stolon which runs on the ground; a rhizome is the same thing, but running underground. Rhizome can be found in Ginger,Turmeric,Banana,Dryopteris

Plants with stolons or stolon-like rhizomes are called stoloniferous. A stolon is a plant propagation strategy. At nodes, rootlets are put down and new stems are put up. All these plant forms are clones from a single genetic individual.

All content from Kiddle encyclopedia articles (including the article images and facts) can be freely used under Attribution-ShareAlike license, unless stated otherwise. Cite this article:
Stolon Facts for Kids. Kiddle Encyclopedia.