The Museum of Fine Arts (often abbreviated as MFA Boston or MFA) in Boston, Massachusetts, is the 14th largest art museum in the world, measured by public gallery area. It contains more than 450,000 works of art, making it one of the most comprehensive collections in the Americas. It is home to 8,161 paintings, surpassed among American museums only by the Metropolitan Museum of Art in New York City. With more than 1.2 million visitors a year, it is the 52nd most visited art museum in the world as of 2019[update].

Founded in 1870 in Copley Square, the museum moved to its current Fenway location in 1909. The museum is affiliated with the School of the Museum of Fine Arts at Tufts. 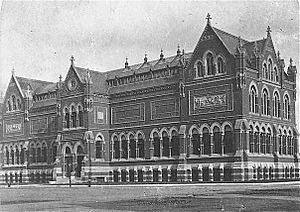 The original Museum of Fine Arts building in Copley Square.

The Museum of Fine Arts was founded in 1870 and was initially located on the top floor of the Boston Athenaeum and most of its initial collection came from the Athenæum's Art Gallery. Francis Davis Millet, a local artist, was instrumental in starting the Art School affiliated with the museum, and in appointing Emil Otto Grundmann as its first director. In 1876, the museum moved to a highly ornamented brick Gothic Revival building designed by John Hubbard Sturgis and Charles Brigham, noted for its massed architectural terracotta. It was located in Copley Square at Dartmouth and St. James Streets. It was built almost entirely of brick and terracotta, which was imported from England, with some stone about its base. After the MFA moved out in 1907, this original building was demolished, and the Copley Plaza Hotel (now the Fairmont Copley Plaza) replaced it in 1912.

In 1907, plans were laid to build a new home for the museum on Huntington Avenue in Boston's Fenway-Kenmore neighborhood, near the recently opened Isabella Stewart Gardner Museum. Museum trustees hired architect Guy Lowell to create a design for a museum that could be built in stages, as funding was obtained for each phase. Two years later, the first section of Lowell's neoclassical design was completed. It featured a 500-foot (150 m) façade of granite and a grand rotunda. The museum moved to its new location later in 1909.

The second phase of construction built a wing along The Fens to house paintings galleries. It was funded entirely by Maria Antoinette Evans Hunt, the wife of wealthy business magnate Robert Dawson Evans, and opened in 1915. From 1916 through 1925, the noted artist John Singer Sargent painted the frescoes that adorn the rotunda and the associated colonnades.

The Decorative Arts Wing was built in 1928, and expanded in 1968. An addition designed by Hugh Stubbins and Associates was built in 1966–1970, and another expansion by The Architects Collaborative opened in 1976. The West Wing, now the Linde Family Wing for Contemporary Art, was designed by I. M. Pei and opened in 1981. This wing now houses the museum's cafe, restaurant, meeting rooms, classrooms, and a giftshop/bookstore, as well as large exhibition spaces. 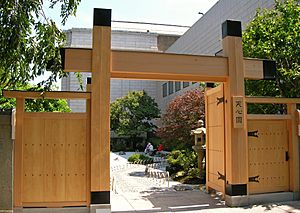 The Tenshin-En Japanese Garden designed by Kinsaku Nakane opened in 1988, and the Norma Jean Calderwood Garden Court and Terrace opened in 1997.

In the mid-2000s, the museum launched a major effort to renovate and expand its facilities. In a seven-year fundraising campaign between 2001 and 2008 for a new wing, the endowment, and operating expenses, the museum managed to receive over $500 million, in addition to acquiring over $160 million worth of art.

During the global financial crisis between 2007 and 2012, the museum's annual budget was trimmed by $1.5 million. The museum increased revenues by organizing traveling exhibitions, which included a loan exhibition sent to the for-profit Bellagio in Las Vegas in exchange for $1 million. In 2011, Moody's Investors Service calculated that the museum had over $180 million in outstanding debt. However, the agency cited growing attendance, a large endowment, and positive cash flow as reasons to believe that the museum's finances would become stable in the near future.

In 2011, the museum put eight paintings by Monet, Renoir, Pissarro, Sisley, Gauguin, and others on sale at Sotheby's, bringing in a total of $21.6 million, to pay for Man at His Bath by Gustave Caillebotte at a cost reported to be more than $15 million.

On March 12, 2020, the museum announced that it would close indefinitely due to the COVID-19 pandemic. All public events and programs were canceled until August 31, 2020. The museum reopened on September 26, 2020.

Art of the Americas Wing

The renovation included a new Art of the Americas Wing to feature artwork from North, South, and Central America. In 2006, the groundbreaking ceremonies took place. The new wing and adjoining Ruth and Carl J. Shapiro Family Courtyard (a bright, cavernous interior space) were designed in a restrained, contemporary style by the London-based architectural firm Foster and Partners, under the directorship of Thomas T. Difraia and CBT/Childs Bertman Tseckares Architects. The landscape architecture firm Gustafson Guthrie Nichol redesigned the Huntington Avenue and Fenway entrances, gardens, access roads, and interior courtyards.

The wing opened on November 20, 2010 with free admission to the public. Mayor Thomas Menino declared it "Museum of Fine Arts Day", and more than 13,500 visitors attended the opening. The 12,000-square-foot (1,100 m2) glass-enclosed courtyard now features a 42.5-foot (13.0 m) high glass sculpture, titled the Lime Green Icicle Tower, by Dale Chihuly. In 2014, the Art of the Americas Wing was recognized for its high architectural achievement by the award of the Harleston Parker Medal, by the Boston Society of Architects.

In 2015, the museum renovated its outdoors Japanese garden, Tenshin-en. The garden, which originally opened in 1988, had been designed by Japanese professor Kinsaku Nakane. The garden's kabukimon-style entrance gate was built by Chris Hall of Massachusetts, using traditional Japanese carpentry techniques.

The Museum of Fine Arts possesses materials from a wide variety of art movements and cultures. The museum also maintains a large online database with information on over 346,000 items from its collection, accompanied with digitized images. Online search is freely available through the Internet.

Some highlights of the collection include:

The collection of Japanese art at the Museum of Fine Arts is the largest in the world outside of Japan. Anne Nishimura Morse, the William and Helen Pounds Senior Curator of Japanese Art oversees 100,000 total items that include 4,000 Japanese paintings, 5,000 ceramic pieces, and over 30,000 ukiyo-e prints.

The base of this collection was assembled in the late 19th century through the efforts of four men, Ernest Fenollosa, Kakuzo Okakura, William Sturgis Bigelow, and Edward Sylvester Morse, each of whom had spent time in Japan and admired Japanese art. Their combined donations account for up to 75 percent of the current collection. In 1890, the Museum of Fine Arts, Boston became the first museum in the United States to establish a collection and appoint a curator specifically for Japanese art.

Another notable part of this collection is a number of Buddhist statues. In the later Meiji Era of Japan, around the turn of the 20th century, government policy deemphasizing Buddhism in favor of Shintoism and financial pressures on temples resulted in a number of Buddhist statues being sold to private collectors. Some of these statutes came into the collection of the Museum of Fine Arts. Today, these statues are the subject of preservation and restoration efforts, which have been at times viewable by the public in special exhibits.

The libraries at the Museum of Fine Arts collectively house 320,000 items. The main branch, the William Morris Hunt Memorial Library, is named after the noted American artist. It is located off-site in Horticultural Hall, two stops away on the MBTA Green Line. The main library is open to the public, and the catalog can be searched online.

Exhibitions organized by the library staff in coordination with the School of the Museum of Fine Arts at Tufts are opened 2 to 3 times per year. 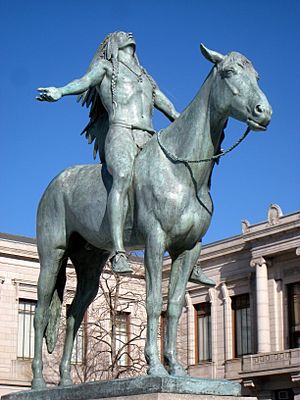 The MFA has gradually been expanding its programs of community outreach to people who have not been traditional visitors, and this trend accelerated after Matthew Teitelbaum was appointed as Director in 2015. This expansion has included improved accessibility for visitors who may be visually, audibly, or physically impaired. Special programming and tours are available for blind, ASL-fluent, cognitively-impaired, autistic, and medically-assisted guests. In addition, the MFA has welcomed LGBTQ visitors with exhibitions like Gender Bending Fashion (2019), and in Spring 2019 it installed universally welcoming signage for restrooms.

Starting in July 2017, the MFA has offered a free one-year family membership to all newly naturalized US citizens under its "MFA Citizens" program.

The MFA publicly apologized in May 2019 after African-American and mixed-race 12- and 13-year-old visitors were allegedly targeted by employees and told "No food, no drink, and no watermelon", which is considered a racial slur in the US. A museum spokesperson said that the warning was actually "no water bottles", but conceded that there was no way of definitively proving what was actually said. Regardless, all museum staff dealing with school groups were to be retrained in interactions with their guests. The MFA also concluded that two of its members had been deliberately racist, and permanently banned them from visiting its grounds.

On October 14, 2019 the MFA debuted its newly renamed "Indigenous Peoples’ Day" (formerly "Columbus Day") celebrations, with a focus on Native American art and culture. The events included special displays related to Cyrus Dallin’s 1908 Appeal to the Great Spirit, a popular and sometimes controversial sculpture of a Native American warrior located in front of the Huntington Avenue main entrance since 1912. Community comments and feedback concerning the monumental artwork were solicited and displayed. Earlier, in March 2019, the MFA had held a special public symposium to discuss the historical background and present-day significance of the iconic sculpture.

To commemorate its 150th anniversary, the MFA is offering a free one-year family membership to anyone who attends one of its special Community Celebrations or MFA Late Nite programs during 2020. This "First Year Free Membership" program is available to anyone who has not previously been a member of the museum. The 150th year exhibitions include major shows and events featuring art by women and minority artists.

Among the many notable works in the collection, the following examples are in the public domain and have photographs available:

All content from Kiddle encyclopedia articles (including the article images and facts) can be freely used under Attribution-ShareAlike license, unless stated otherwise. Cite this article:
Museum of Fine Arts, Boston Facts for Kids. Kiddle Encyclopedia.