The Isabella Stewart Gardner Museum is an art museum in Boston, Massachusetts, which houses significant examples of European, Asian, and American art. Its collection includes paintings, sculpture, tapestries, and decorative arts. It is originally the home of Isabella Stewart Gardner, whose will called for her art collection be permanently exhibited "for the education and enjoyment of the public forever".

An auxiliary wing, adjacent to the original structure near the Back Bay Fens, was completed in 2012.

In 1990, thirteen of the museum's works were stolen; the crime remains unsolved, and the works, valued at an estimated $500 million, have not been recovered. A $10 million reward for information leading to the art's recovery remains in place.

The home which houses today's museum was built in 1903 by Isabella Stewart Gardner (1840–1924), an American art collector, philanthropist, and patron of the arts. It is housed in a building designed to emulate a 15th-century Venetian palace, drawing particular inspiration from the Venetian Palazzo Barbaro.

Gardner began collecting seriously after she received a large inheritance from her father in 1891. Her purchase of Johannes Vermeer's The Concert (c. 1664) at auction in Paris in 1892 was her first major acquisition. In 1894, Bernard Berenson offered his services in helping her acquire a Botticelli. With his help, Gardner became the first American to own a painting by the Renaissance master. Berenson helped acquire nearly 70 works of art for her collection.

After her husband John L. Gardner's death in 1898, Isabella Gardner realized their shared dream of building a suitable space to exhibit their treasures. She purchased land in the marshy Fenway area of Boston, and hired architect Willard T. Sears to build a home, Fenway Court, modeled on the Renaissance palaces of Venice. Gardner was deeply involved in every aspect of the design, leading Sears to quip that he was merely the structural engineer making Gardner's design possible. After the construction of the building was complete, Gardner spent a year installing her collection in a way that evokes intimate responses to the art, mixing paintings, furniture, textiles and objects from different cultures and periods among well-known European paintings and sculpture. The gallery installations were very different than they appear today; the Room of Early Italian Paintings, for example, served as her Chinese Room until about 1914.

The museum opened on January 1, 1903, with a grand celebration featuring a performance by members of the Boston Symphony Orchestra and a menu that included champagne and doughnuts. In 1909 the Museum of Fine Arts moved to its new home close by.

When Gardner died in 1924, her will created an endowment of $1 million and outlined stipulations for the support of the museum, including the charge that her collection be permanently exhibited "for the education and enjoyment of the public forever" according to her aesthetic vision and intent.

Early in the morning of March 18, 1990, two thieves disguised as police officers robbed the museum of thirteen works worth some $500 million – the greatest known property theft in history. Among the works was The Concert (c. 1664), one of only 34 known by Johannes Vermeer and thought to be the most valuable unrecovered painting at over $200 million. Also missing is The Storm on the Sea of Galilee (1633), Rembrandt's only known seascape.

The works have not been recovered. The museum initially offered a reward of $5 million for information leading to recovery of the art, doubled in May 2017 to $10 million. Empty frames hang in the Dutch Room gallery as placeholders for the missing works. The selection of stolen works puzzled experts, as more valuable artworks were present in the museum. According to the FBI, the stolen artwork was moved through the region and offered for sale in Philadelphia during the early 2000s. They believe the thieves were members of a criminal organization based in the mid-Atlantic and New England. 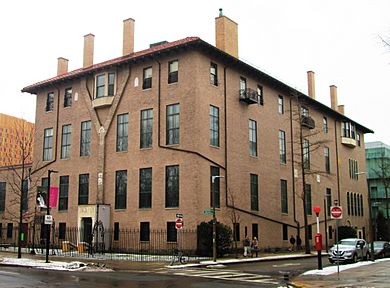 Built to evoke a 15th-century Venetian palace, the museum itself provides an atmospheric setting for Gardner's inventive creation. Gardner hired Willard T. Sears to design the building near the marshy Back Bay Fens to house her growing art collection. Inside the museum, three floors of galleries surround a garden courtyard blooming with life in all seasons.

It is a common misconception that the building was brought to America from Venice and reconstructed. It was built from the ground up in Boston out of new materials, incorporating numerous architectural fragments from European Gothic and Renaissance structures.

Antique elements are worked into the design of the turn-of-the-century building. Special tiles were custom designed for the floors, modern concrete was used for some of the structural elements, and antique capitals sit atop modern columns. The interior garden courtyard is covered by a glass roof, with steel support structure original to the building.

The Gardner Museum is much admired for the intimate atmosphere in which its works of art are displayed and for its flower-filled courtyard. Most of the art pieces are unlabeled, and the generally low lighting is more akin to a private house than a modern art museum.

Gardner collected and carefully displayed a collection of more than 7500 paintings, sculptures, furniture, textiles, silver, ceramics, 1500 rare books, and 7000 archival objects from ancient Rome, Medieval Europe, Renaissance Italy, Asia, the Islamic world, and 19th-century France and America. Among the artists represented in the galleries are Titian, Rembrandt, Michelangelo, Raphael, Botticelli, Manet, Degas, Whistler and Sargent. The first Matisse to enter an American collection is housed in the Yellow Room.

Glass skylights illuminate the central atrium of the New Wing

In 2002, after a two-year master planning process, the museum's board of trustees determined that a new wing was necessary to preserve the historic building and to provide improved spaces for programs that continue Isabella Gardner's legacy. In 2004, Pritzker Prize–winning architect Renzo Piano and the Renzo Piano Building Workshop (Genoa, Italy) were selected to design the new wing. The design for the new wing is conceived as a respectful complement to the historic Museum building in scale, form, and materials.

The new expansion includes spaces for visitor services, concerts, special exhibitions, and education and landscape programs, furthering Isabella Gardner's legacy in art, music, and horticulture while reducing 21st-century strain on the collection and galleries. The completion date was 2012, and the project cost $118 million.

The museum regularly produces scholarly exhibitions, lectures, family programs, and symposia that provide insights into the historic collection. Through the Artist-in-Residence program, artists in many disciplines are invited to live at and draw inspiration from the museum. The museum often hosts exhibitions of contemporary art, performances, and programs by those selected.

Reflecting Isabella Gardner's passion for horticulture and garden design, the Gardner's interior courtyard combines ever-changing horticultural displays with sculpture and architectural elements. The interplay between the courtyard and the museum galleries offers visitors a fresh view from almost every room, inviting connections between art and landscape. Programs like the Landscape Visions lecture series and special Ask the Gardner hours further engage visitors to embrace the art of landscape.

The Gardner's exhibitions since 2002 include:

The Gardner has also hosted the following exhibitions of contemporary art.

All content from Kiddle encyclopedia articles (including the article images and facts) can be freely used under Attribution-ShareAlike license, unless stated otherwise. Cite this article:
Isabella Stewart Gardner Museum Facts for Kids. Kiddle Encyclopedia.