Hercules is a hero in Roman mythology. He is a mortal son of Alcmene and Zeus. Hercules is known for his great strength. In Greek mythology he is named Herakles, but he has some different stories. 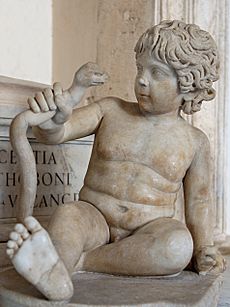 Although he was seen as the champion of the weak and a great protector, Hercules' personal problems started at birth.

Hera sent two witches to prevent the birth, but they were tricked by one of Alcmene's servants and sent to another room. Hera then sent serpents to kill him in his cradle, but Hercules strangled them both.

In one version of the myth, Alcmene abandoned her baby in the woods in order to protect him from Hera's wrath, but he was found by the goddess Athena who brought him to Hera, claiming he was an orphan child left in the woods who needed nourishment. Hera fed Hercules until the infant bit, at which point she pushed him away, spilling her milk across the night sky and so forming the Milky Way. She then gave the infant back to Athena and told her to take care of the baby herself. In feeding the child herself, the goddess gave him further strength and power. 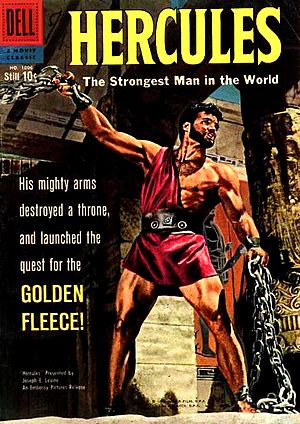 In one of the more well known stories of Hercules, he had to complete twelve tasks. These tasks were: 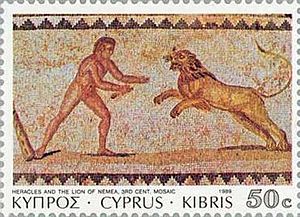 Greek stamp depicting a mosaical image of the encounter between Hercules and Leo,the Nemean Lion.

In Greek mythology, the constellation Leo was identified as the Nemean Lion which was killed by Heracles (Hercules to the Romans) during the first of his twelve labours. The Nemean Lion would take women as hostages to its lair in a cave, luring warriors from nearby towns to save the damsel in distress, to their misfortune.

The Lion couldn't be harmed by weapons.

Realizing that he must defeat the Lion with his bare hands, Hercules slipped into the Lion's cave and engaged it at close quarters. When the Lion pounced, Hercules caught it in midair, one hand grasping the Lion's forelegs and the other its hind legs, and bent it backwards, breaking its back and freeing the trapped maidens.

Zeus commemorated this labor by placing the Lion in the sky.

Hercules is also a character in Marvel Comics. He was an ally of the mighty Thor. He is the leader and a founding member of the super team the Champions. He was created by Stan Lee and Jack Kirby in 1962.

Hercules also appears in the 1997 Disney movie of the same name, in which he is voiced by Tate Donovan.

All content from Kiddle encyclopedia articles (including the article images and facts) can be freely used under Attribution-ShareAlike license, unless stated otherwise. Cite this article:
Hercules Facts for Kids. Kiddle Encyclopedia.