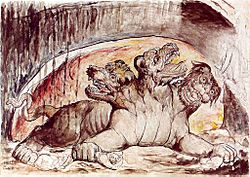 Kerberos (Latin Cerberus) is a creature in Greek mythology, like a hound (dog) with three heads. It belongs to Hades, and it guards the gate of the Greek underworld. Cerberus is a Hellhound and is related to another mythical animal, the Chimera (part goat, part lion, part snake). Cerberus makes sure the dead stay within the gates and the living stay away from them. However, the Greeks did note in their myths that Cerberus was a fan of sweet things like honey cakes (The myth of Eros and Psyche) and music (The myth of Orpheus in the Underworld). Another way to become friends with the animal was to talk to his owner, Hades, the Lord of the Underworld (The labours of Hercules).Cerbus is the son of Typhon and echidna.

Descriptions of Cerberus vary, including the number of his heads. Cerberus was usually three-headed, though not always. Cerberus had a multi-headed heritage. His father was the multi snake-headed Typhon, and Cerberus was the brother of three other multi-headed monsters, the multi-snake-headed Lernaean Hydra; Orthrus, the two-headed dog who guarded the Cattle of Geryon; and the Chimera, who had three heads, that of a lion, a goat, and a snake. And, like these close relatives, Cerberus was, with only the rare iconographic exception, multi-headed.

In the earliest description of Cerberus, Hesiod's Theogony (c. 8th – 7th century BC), Cerberus has fifty heads, while Pindar (c. 522 – c. 443 BC) gave him one hundred heads. However, later writers almost universally give Cerberus three heads. An exception is the Latin poet Horace's Cerberus which has a single dog head, and one hundred snake heads. Perhaps trying to reconcile these competing traditions, Apollodorus's Cerberus has three dog heads and the heads of "all sorts of snakes" along his back, while the Byzantine poet John Tzetzes (who probably based his account on Apollodorus) gives Cerberus fifty heads, three of which were dog heads, the rest being the "heads of other beasts of all sorts". 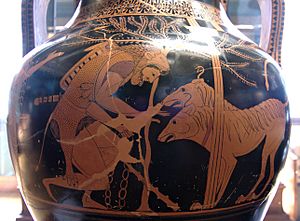 Heracles, chain in left hand, his club laid aside, calms a two-headed Cerberus, which has a snake protruding from each of his heads, a mane down his necks and back, and a snake tail. Cerberus is emerging from a portico, which represents the palace of Hades in the underworld. Between them, a tree represents the sacred grove of Hades' wife Persephone. On the far left, Athena stands, left arm extended. Amphora (c. 525–510 BC) from Vulci (Louvre F204).

In art Cerberus is most commonly depicted with two dog heads (visible), never more than three, but occasionally with only one. On one of the two earliest depictions (c. 590–580 BC), a Corinthian cup from Argos (see below), now lost, Cerberus is shown as a normal single-headed dog. The first appearance of a three-headed Cerberus occurs on a mid sixth century BC Laconian cup (see below).

Horace's many snake-headed Cerberus followed a long tradition of Cerberus being part snake. This is perhaps already implied as early as in Hesiod's Theogony, where Cerberus' mother is the half-snake Echidna, and his father the snake-headed Typhon. In art Cerberus is often shown as being part snake, for example the lost Corinthian cup shows snakes protruding from Cerberus' body, while the mid sixth-century BC Laconian cup gives Cerberus a snake for a tail. In the literary record, the first certain indication of Cerberus' serpentine nature comes from the rationalized account of Hecataeus of Miletus (fl. 500–494 BC), who makes Cerberus a large poisonous snake. Plato refers to Cerberus' composite nature, and Euphorion of Chalcis (3rd century BC) describes Cerberus as having multiple snake tails, and presumably in connection to his serpentine nature, associates Cerberus with the creation of the poisonous aconite plant. Virgil has snakes writhe around Cerberus' neck, Ovid's Cerberus has a venomous mouth, necks "vile with snakes", and "hair inwoven with the threatening snake", while Seneca gives Cerberus a mane consisting of snakes, and a single snake tail.

There are various versions of how Heracles accomplished Cerberus' capture. According to Apollodorus, Heracles asked Hades for Cerberus, and Hades told Heracles he would allow him to take Cerberus only if he "mastered him without the use of the weapons which he carried", and so, using his lion-skin as a shield, Heracles squeezed Cerberus around the head until he submitted.

In the constellation Cerberus introduced by Johannes Hevelius in 1687, Cerberus is drawn as a three-headed snake, held in Hercules' hand (previously these stars had been depicted as a branch of the tree on which grew the Apples of the Hesperides).

All content from Kiddle encyclopedia articles (including the article images and facts) can be freely used under Attribution-ShareAlike license, unless stated otherwise. Cite this article:
Cerberus Facts for Kids. Kiddle Encyclopedia.