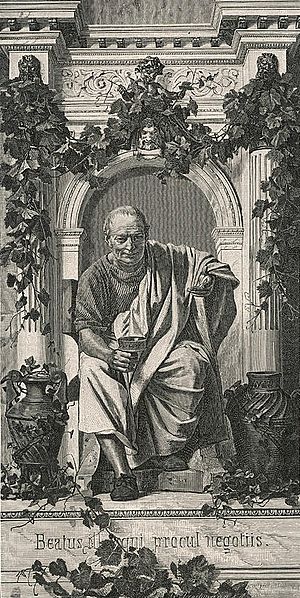 No photographs or paintings exist from when Horace was alive. This is how Anton von Werner imagined he would look.

Quintus Horatius Flaccus (December 8, 65 BC - November 27, 8 BC), known to English speakers as Horace, was a famous poet in the Roman Empire.

Horace was born in the small Italian town of Venusia. His father used to be a slave, but was known as a freedman because his master had freed him. They moved to Rome a short time later. Horace's father had a job taking items from the seller to the buyer. He received money from these sales. His father became richer and was able to send Horace to the best schools in Rome. He was also able to send him to Athens (Greece) to study the Greek language and philosophy. Horace's native language was Latin. Horace was incredibly proud of his father, and said he felt no shame in being the son of a freedman.

In his early adult life, Julius Caesar, the Roman dictator, was killed. War was declared against the people who killed him. Horace joined the army. When the war was over, Horace returned to Italy to find that other people were living in his apartment. His father was also gone. Horace became very poor. Eventually, he found a job in the treasury. This involved sorting the country's money.

His friends, Lucius Varius Rufus and Virgil, who were also writers, introduced him to Maecenas. Maecenas was a close friend of Augustus, the emperor of Rome. Horace lived in Tivoli, an area of Rome. When he died, he gave the land he owned to Augustus, to increase the land the state owned. Today, other writers visit the land to remember him.

Horace wrote many famous quotes in his poems. These lines are still spoken today, by speakers of every language, in the original Latin.

Some of Horace's poems are difficult to translate because of their syntax, grammar and structure, which is sometimes very different to modern languages.

Horace is viewed by many people, including experts, to be one of the best Latin poets.

All content from Kiddle encyclopedia articles (including the article images and facts) can be freely used under Attribution-ShareAlike license, unless stated otherwise. Cite this article:
Horace Facts for Kids. Kiddle Encyclopedia.