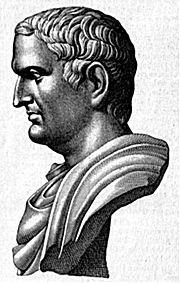 Mark Antony (Latin: Marcus Antoninus, 14 January circa 82 BC – 1 August 30 BC), was a Roman patrician from an upper-class family. He became a general and politician. He was an important supporter of Julius Caesar as a military commander and administrator.

Enemy of the state and triumvirate 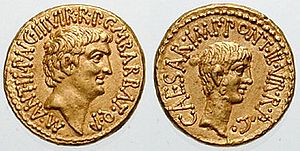 Roman aureus bearing the portraits of Mark Antony (left) and Octavian (right). Struck in 41 BC, this coin was issued to celebrate the establishment of the Second Triumvirate by Octavian, Antony and Lepidus in 43 BC. Both sides bear the inscription "III VIR R P C", meaning "One of Three Men for the Regulation of the Republic".

After Caesar's assassination, Antony, left as sole Consul, surrounded himself with a bodyguard of Caesar's veterans. He forced the senate to transfer to him the province of Cisalpine Gaul, at the time administered by Brutus, one of the conspirators. Brutus refused to surrender the province and Antony set out to attack him in the beginning of 43 BC, besieging him at Mutina.

Encouraged by Cicero, the Senate denounced Antony. In January 43 they granted Octavian imperium (commanding power), and sent him to relieve the siege. In April 43, Antony's forces were defeated at the battles of Forum Gallorum and Mutina, forcing Antony to retreat to Transalpine Gaul.

News came that Brutus and Cassius were assembling an army in order to march on Rome. Antony, Octavian and Lepidus joined as allies, in November 43 BC, to stop Caesar's assassins. The trio were the Second Triumvirate. Brutus and Cassius were defeated by Antony and Octavian at the Battle of Philippi in October 42 BC. After the battle, a new arrangement was made: while Octavian returned to Rome, Antony went on to govern the east of the Republic. Lepidus went to govern Hispania (Spain) and the province of Africa. The triumvirate's enemies were subjected to proscription, including Mark Antony's archenemy Cicero, who was killed on 7 December 43 BC.

Antony followed in Caesar's footsteps by going to Egypt and becoming Cleopatra's lover. They had three children together. His absence from Rome allowed the intelligent Octavian to build up support.

The triumvirate broke up in 33 BC, and disagreement turned to civil war in 31 BC. Antony was defeated by Octavian at the naval Battle of Actium and then at Alexandria.

William Shakespeare wrote a play "Antony and Cleopatra" based on this historical event.

All content from Kiddle encyclopedia articles (including the article images and facts) can be freely used under Attribution-ShareAlike license, unless stated otherwise. Cite this article:
Mark Antony Facts for Kids. Kiddle Encyclopedia.