George Orson Welles (May 6, 1915 – October 10, 1985) was an American director of movies and the theatre, as well as an actor, screenwriter, broadcaster and producer.

Welles was born in Kenosha, Wisconsin.

In 1938, he performed The War of the Worlds (about an attack on Earth by beings from the planet Mars) on the radio. It was a radio drama (fiction), but many people took it as a newscast.

Welles also made the movie Citizen Kane in 1941. Many movie critics think that this movie is the best movie ever made. 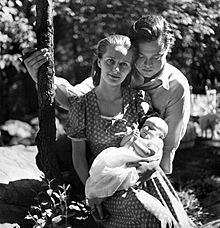 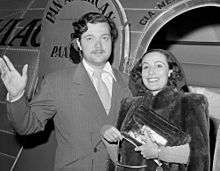 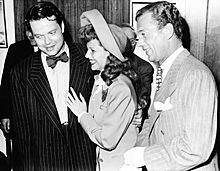 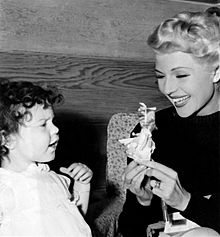 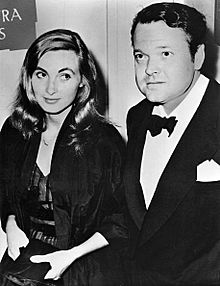 Paola Mori and Welles, days before their marriage (May 1955)

Infatuated with her since adolescence, Welles met del Río at Darryl Zanuck's ranch soon after he moved to Hollywood in 1939. Del Río returned to Mexico in 1943, shortly before Welles married Rita Hayworth.

In 1955, Welles married actress Paola Mori (née Countess Paola di Gerfalco), an Italian aristocrat. They were wed in London May 8, 1955 and never divorced.

Croatian-born artist and actress Oja Kodar became Welles's longtime companion both personally and professionally from 1966 onward, and they lived together for some of the last 20 years of his life.

All content from Kiddle encyclopedia articles (including the article images and facts) can be freely used under Attribution-ShareAlike license, unless stated otherwise. Cite this article:
Orson Welles Facts for Kids. Kiddle Encyclopedia.