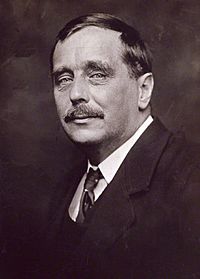 Herbert George Wells (21 September 1866 – 13 August 1946) was an English author. He was born in Bromley, Kent. He wrote about 50 books. He was one of the inventors of science fiction, and also wrote novels and utopias. He wrote books such as The Invisible Man, The Time Machine, The Island of Dr. Moreau, and The War of the Worlds. He also explained how the things he wrote about could actually happen. Some of his books have been made into movies. He had diabetes. He died in London.

All content from Kiddle encyclopedia articles (including the article images and facts) can be freely used under Attribution-ShareAlike license, unless stated otherwise. Cite this article:
H. G. Wells Facts for Kids. Kiddle Encyclopedia.