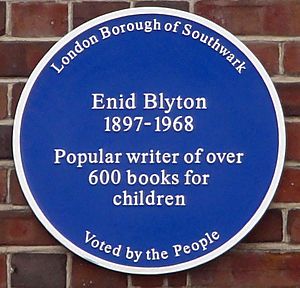 The Blue Plaque is a scheme for remembering the links between famous people and buildings by placing commemorative plaques on the walls. The scheme was started by the Royal Society of Arts in London, and the very first plaques was, in fact, of red terracotta placed on the outside of a former home of Lord Byron (since demolished).

The Society erected 36 plaques between 1866 - 1901, responsibility for them was transferred to the London County Council (1901-65) (which changed the colour of the plaques to the current blue) and later the Greater London Council (1965-86) and most recently English Heritage. Similar schemes are now operated in all the member countries of the United Kingdom.

English Heritage looks after the Blue plaque scheme in the London Boroughs. Similar schemes exist outside London, run by each local authority. The system has been adopted outside the United Kingdom too, for example, in June 2010 a Blue Plaque was put on the home of Guernsey artist Peter Le Lievre.

All content from Kiddle encyclopedia articles (including the article images and facts) can be freely used under Attribution-ShareAlike license, unless stated otherwise. Cite this article:
Blue plaque Facts for Kids. Kiddle Encyclopedia.