William Bligh (9 September 1754–7 December 1817) was an English officer in the British Navy. He sailed with Captain James Cook on his third and final voyage in 1776. In 1787 Bligh was made captain of HMS Bounty and sailed to Tahiti to collect breadfruit trees. A Mutiny on the Bounty prevented finishing this task. In 1806 he was made Governor of New South Wales. After going back to England, Bligh was made a Rear-Admiral and later a Vice-Admiral in the Royal Navy.

Bligh joined the navy at age 16 when he became an able seaman on HMS Hunter in 1770. In September 1771 he changed ships and served on HMS Crescent. At 21 (17 March 1776) he was made the master of Captain James Cook's ship, the Resolution, part of Cook's third and final voyage. Bligh got back to England in 1780. He left the Royal Navy and worked as a captain in the merchant navy from 1783 to 1787.

Main page: Mutiny on the Bounty

In 1787 Bligh became leader of a small expedition to be sent to Tahiti to get breadfruit trees. These would be planted in the West Indies as food for the slaves. The Bounty left Tahiti loaded with breadfruit trees on 4 April 1789. Three weeks later, a seaman named Fletcher Christian led a mutiny (take over) of the ship. Christian wanted to go back to Tahiti. This event is called the Mutiny on the Bounty. Bligh and 18 seamen were put into a small boat, with little food or water, four swords, a sextant, a pocket watch, but no map. They were able to get to Batavia (now Jakarta), a distance of 6701 km, in 47 days. Bligh finally got back to England in March, 1790. He wrote a book about the mutiny called A Narrative of the Mutiny on board His Majesty's Ship "Bounty".

In August 1791 Bligh set out again to get breadfruit trees. He was also told to find out more about Torres Strait, between Australia and New Guinea. He took two ships, the Providence and the Assistant, getting back to England in August 1793. 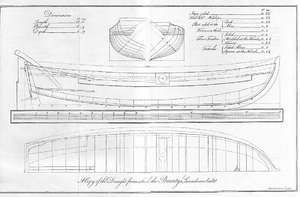 Bligh spent the next 10 years in the Royal Navy. In March 1805 he was given the job of Governor of New South Wales. He left England in February 1806 and arrived in Sydney in August. One of his jobs was to control the supply of alcohol into the young colony. In Sydney at this time, alcohol was used as a form of money, which caused a lot of unrest among the settlers. The army officers and several other people in New South Wales had a monopoly on bringing alcohol into the country. They were very angry with Bligh because he tried to control their alcohol business. 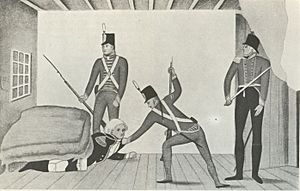 The officers started legal actions against Bligh who then had one of the settlers John Macarthur arrested for sedition (trying to start a rebellion against the government). One of the soldiers, Major George Johnston, let Macarthur out of jail, and on 26 January 1808, he led the army to Government House and put Bligh under arrest. The army then took over the government. This became known as the Rum Rebellion. After one year Bligh was released on the condition that he went back to England. He agreed, but then sailed to Hobart to try and get help from Colonel David Collins who was the Lieutenant-Governor of Tasmania. Collins did not offer help and Bligh remained in Hobart for another year.

The British government sent out a new governor, Lachlan Macquarie. Bligh and Major Johnston went back to London, arriving on 25 October 1810. In the legal action all the charges against Bligh were found not to be true, and Johnston was found to be guilty. Johnson was sacked from the army, and in 1811 Bligh was made a Rear-Admiral, and later a Vice-Admiral. He retired to Kent. Bligh died on a visit to London on 7 December 1817.

All content from Kiddle encyclopedia articles (including the article images and facts) can be freely used under Attribution-ShareAlike license, unless stated otherwise. Cite this article:
William Bligh Facts for Kids. Kiddle Encyclopedia.