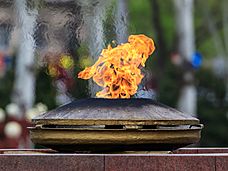 An Eternal flame is a flame that burns for a very long time. They are used for creating a powerful symbol. There was an eternal flame in the ancient Greek temple at Delphi. Other famous eternal flames include the one at the Tomb of the Unknown Soldier in Paris, the John F. Kennedy Eternal Flame at his grave in the Arlington National Cemetery, and the Australian War Memorial in Canberra, Australia.

All content from Kiddle encyclopedia articles (including the article images and facts) can be freely used under Attribution-ShareAlike license, unless stated otherwise. Cite this article:
Eternal flame Facts for Kids. Kiddle Encyclopedia.