Murchison is a town in the Tasman Region of the South Island of New Zealand. It is near the western end of the "Four Rivers Plain", at the confluence of the Buller River and the Matakitaki River. The other two rivers are the Mangles River, and the Matiri River. It is a rural service town for the surrounding mixed farming district, on New Zealand State Highway 6 approximately halfway between Westport and Nelson. Murchison was named after the famed Scottish geologist Roderick Murchison. At the 2006 census, Murchison had a population of 496. 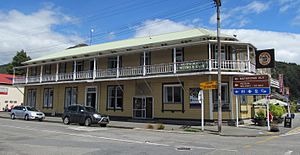 Hampden Hotel, the iconic 19th century hotel on the main street of Murchison

The district is steeped in history from the days of the gold miners and early settlers. Lyell, once one of the largest gold mining settlements in the South Island, is nearby, and offers an interesting example of how quickly the bush can wipe away traces of civilization. Murchison was the epicentre of the 1929 Murchison earthquake (also known as the Buller earthquake).

Recognised as the "Whitewater Capital" of New Zealand, nearby rivers include the Gowan River, Mangles River, Matiri River, Glenroy River, Matakitaki River, Maruia River, and the Buller, with many excellent whitewater runs along its length. These rivers vary from Class 2 to 4 whitewater. These rivers are also world-renowned for fly fishing for large brown trout in gin-clear water. Being on the edge of both Kahurangi and Nelson Lakes National Parks, there are many interesting walks nearby. Lake Matiri and Mt Owen define southern access points for entering Kahurangi and both are spectacular. There are also many other areas of native bush where hikers/trampers can experience the great outdoors.

All content from Kiddle encyclopedia articles (including the article images and facts) can be freely used under Attribution-ShareAlike license, unless stated otherwise. Cite this article:
Murchison, New Zealand Facts for Kids. Kiddle Encyclopedia.