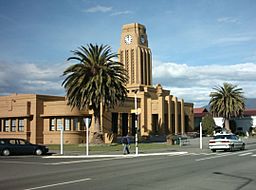 Westport is a town in the West Coast region of the South Island of New Zealand. It is on the northern bank and at the mouth of the Buller River, close by the prominent headland of Cape Foulwind. It is connected via State Highway 6 with Greymouth, 100 kilometres (62 mi) to the south, and with Nelson in the northeast, via the Buller Gorge.

The town is thought to have been named after Westport, County Mayo in Ireland, although the choice of name was no doubt also guided by the town's location. The population of the Westport urban area was 3,900 in the 2006 Census, an increase of 117 from 2001. Including the surrounding area of Orowaiti, the 2006 population was 4,512. The Buller District Council gives a 2007 population of about 5,000.

There is evidence that Māori settlers lived in the Buller (Kawatiri) area from very early on. The settlers appeared to live mostly coastal lives, though they explored the mountains for pounamu (jade or greenstone), which they then traded with other iwi.

The first white settlers came to Westport in 1861 as gold miners, and the first European vessel known to have entered the river was the sealing schooner Three Brothers in 1884. The 1880s saw many exploratory parties of geologists and surveyors combing the area for the presence of valuable resources and taking the measure of the land. Amongst them were Charles Heaphy, William Fox and Thomas Brunner. While gold brought initial interest to the area, and for example, led to large areas of the coastal areas (covered by sediment from the river) being dredged for the valuable mineral, the area soon became much more famous for coal mining, still a dominant concern in the region today.

During the period, 1853 to 1876, Westport was administrated as part of the Nelson Province.

The first railway of the area in 1864 ran from Westport 18 kilometres (11 mi) to the coal fields, most of them north of town. The first section of railway from Westport to Fairdown via Sergeants Hill opened on 31 December 1875; this line ultimately reached Seddonville in 1895 and was known as the Seddonville Branch. From this beginning, an isolated network of branch lines was developed and it was not linked to the national network until the completion of the Stillwater–Westport Line through the Buller Gorge in 1942.

The Westport climate is strongly influenced by the high amount of precipitation from the Tasman Sea, with all months except February being rather wet on average. Despite very high annual rainfall, Westport is often prone to drought and conservation measures are sometimes triggered. While colder than the more northern parts of New Zealand, average temperature changes over the year are not extreme. 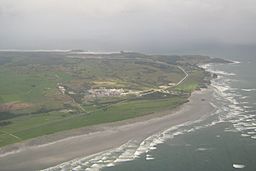 The Holcim cement plant is a large factor in the local economy.

The town used to have one cinema / theatre, the St James Theatre, able to seat 424 patrons for film screenings, theatre productions or other activities. After being found structurally unsound, the theatre had to be demolished. A new theatre has since opened. The NBS theatre has two movie theatres, one which seats 55 people and a boutique theatre that seats approximately 20 people. This theatre also has a large facility with seating for approximately 370 people and a stage for performing.

The Holcim company manages the day-to-day operations of Westport's port, using it to ship their cement product to market, for example to the Port of Onehunga in Auckland.

Westport Airport is a small airport. It was formerly served twice daily on weekdays and daily in the weekend by Air New Zealand from Wellington, and prior to that, flights to Christchurch and Hokitika were also operated. The Air New Zealand service from Wellington service ceased in April 2015 and its place was taken by Sounds Air.

The township also has a links-style, 18-hole, par-72 golf course. The course measures around 5,600 metres (18,400 ft) with medium to narrow fairways and small "target" greens.

The Solid Energy Centre, a sports complex, was opened on 18 April 2009.

All content from Kiddle encyclopedia articles (including the article images and facts) can be freely used under Attribution-ShareAlike license, unless stated otherwise. Cite this article:
Westport, New Zealand Facts for Kids. Kiddle Encyclopedia.