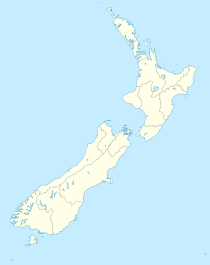 Cape Foulwind is a prominent headland on the West Coast of New Zealand's South Island, overlooking the Tasman Sea. It is located ten kilometres west of the town of Westport. It was previously named Rocky Cape by Abel Tasman, the first European to visit it, in 1642. The present name was bestowed upon this promontory by English explorer James Cook in 1770 after his ship Endeavour was blown quite a distance offshore from this point. 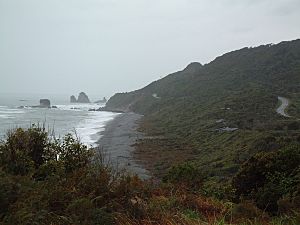 Area of the fur seal colony

Starting from endemic Hector's dolphins, several dolphin species including orcas (killer whales) can be observed around the area. Though still in very small numbers, whales such as southern right whales are started making slow comebacks as well.There are also blue penguins in the area, but it is rare to see one. Unfortunately, the number of fur seals and penguins seem to be declining.

A large cement work, which is now closed, is located close to the cape, taking advantage of the abundant limestone, sand and clay in the immediate area, plus nearby coal mines.

In the lee of the cape, toward the Buller River mouth lies Carters Beach, claimed to be the only safe swimming beach on the West Coast of the South Island.

For the former branch railway line to the quarry see Cape Foulwind Railway.

All content from Kiddle encyclopedia articles (including the article images and facts) can be freely used under Attribution-ShareAlike license, unless stated otherwise. Cite this article:
Cape Foulwind Facts for Kids. Kiddle Encyclopedia.