Hector's dolphin was named after Sir James Hector (1834–1907), who was the curator of the Colonial Museum in Wellington (now the Museum of New Zealand Te Papa Tongarewa). He examined the first specimen of the dolphin found by cephologists. The species was scientifically described by Belgian zoologist Pierre-Joseph van Beneden in 1881. Māori names for Hector's and Māui dolphin include tutumairekurai, tupoupou and popoto. 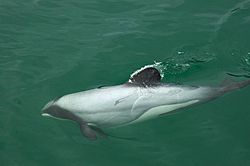 Hector's dolphin is the smallest dolphin species. Mature adults have a total length of 1.2–1.6 m (3 ft 11 in–5 ft 3 in) and weigh 40–60 kg (88–132 lb). The species is sexually dimorphic, with females being about 5–7% longer than males. The body shape is stocky, with no discernible beak. The most distinctive feature is the rounded dorsal fin, with a convex trailing edge and undercut rear margin.

The overall coloration appearance is pale grey, but closer inspection reveals a complex and elegant combination of colours. The back and sides are predominantly light grey, while the dorsal fin, flippers, and flukes are black. The eyes are surrounded by a black mask, which extends forward to the tip of the rostrum and back to the base of the flipper. A subtly shaded, crescent-shaped black band crosses the head just behind the blowhole. The throat and belly are creamy white, separated by dark-grey bands meeting between the flippers. A white stripe extends from the belly onto each flank below the dorsal fin.

At birth, Hector's dolphin calves have a total length of 60–80 cm (24–31 in) and weigh 8–10 kg (18–22 lb). Their coloration is the almost same as adults, although the grey has a darker hue. Newborn Hector's dolphins have distinct fetal fold marks on their flanks that cause a change in coloration pattern of the skin. These changes are visible for approximately six months and consist of four to six vertical light grey stripes against darker grey skin.

Data from field studies, beachcast individuals, and dolphins caught in fishing nets have provided information on their life history and reproductive parameters. Photo-ID based observations at Banks Peninsula from 1984 to 2006 show that individuals can reach at least 22 years of age. Males attain sexual maturity between 6 and 9 years old and females begin calving between 7 and 9 years old. Females will continue to calve every 2–3 years, resulting in a maximum of 4–7 calves in one female's lifetime. Calving occurs during the spring and summer. Calves are weaned at around one year of age, and the mortality rate in the first 6 months was estimated to be around 36%.

These combined life-history characteristics mean that, like many other cetaceans, Hector's dolphins are only capable of slow population growth. Their maximum population growth rate was previously estimated to be 1.8–4.9% per year, based on old demographic information, which was then updated to 3–7% per year, based on updated demographic information and a life history invariant observed across all vertebrates

The species' range includes murky coastal waters out to 100 m (330 ft) depth, though almost all sightings are in waters shallower than 50 m (160 ft). Hector's dolphins display a seasonal inshore-offshore movement; favouring shallow coastal waters during spring and summer, and moving offshore into deeper waters during autumn and winter. They have also been shown to return to the same location during consecutive summers, displaying high foraging site fidelity. The inshore-offshore movement of Hector's dolphins are thought to relate to seasonal patterns of turbidity and the inshore movements of prey species during spring and summer.

Hector's dolphins are generalist feeders, with prey selection based on size (mostly under 10 cm in length) rather than species, although spiny species also appear to be avoided. The largest prey item recovered from a Hector's dolphin stomach was an undigested red cod weighing 500 g with a standard length of 35 cm. The stomach contents of dissected dolphins include a mixture of surface-schooling fish, midwater fish, squid, and a variety of benthic species. The main prey species in terms of mass contribution is red cod, and other important prey include Peltorhamphus flatfish, ahuru, New Zealand sprat, Nototodarus arrow squid, and juvenile giant stargazer.

The remains of Hector's dolphins have been found in the stomachs of broadnose sevengill shark (considered to be their main predator), great white shark and blue shark. Unconfirmed predators of Hector's and Māui dolphins include killer whales (orca), mako sharks and bronze whaler shark.

This species has been found to be show a high level of fluidity with weak inter-individual associations, meaning they do not form strong bonds with other individuals. Three types of small preferential groups have been found: nursery groups; immature and subadult groups; and adult male/female groups. All of these small groups show a high level of sex segregation. Hector's dolphins display a sex-age population group composition, meaning they group by biological sex and age. 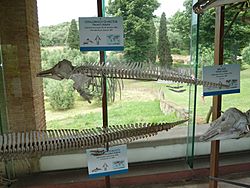 Skeleton in the collection of the Pisa Charterhouse

Hector's and Māui dolphins are endemic to the coastal regions of New Zealand. The Hector's dolphin sub-species is most abundant in discontinuous regions of high turbidity around the South Island. They are most abundant off the East Coast and West Coast, most notably around Banks Peninsula, with smaller, more isolated populations off the North Coast and South Coast (notably at Te Waewae Bay). Smaller populations are scattered around the South Island, including: Cook Strait, Kaikoura, Catlins (e.g., Porpoise Bay, Curio Bay), and Otago coasts (e.g.Karitane, Oamaru, Moeraki, Otago Harbour, and Blueskin Bay). Māui dolphin are typically found on the west coast of the North Island between Maunganui Bluff and Whanganui.

An aerial survey of South Island Hector's dolphin abundance—which was commissioned by the Ministry for Primary Industries, carried out the Cawthron Institute, and endorsed by the International Whaling Commission—estimated a total population size of 14,849 dolphins (95% confidence interval = 11,923–18,492). This was almost twice the previous, published estimate from earlier surveys (7,300; 95% CI 5,303–9,966). This difference was primarily due to a much larger estimated population along East Coast, which was distributed further offshore than previously thought.

Previously, the deep waters of the Cook Strait were considered to be an effective barrier to mixing between the South Island Hector's and North Island Māui sub-species for around 15,000 and 16,000 years. This is coincident with the separation of the North and South Islands of New Zealand at the end of the last ice age. To date, there is no evidence of interbreeding between South Island Hector's dolphin and Māui dolphin, but it is likely they could given their close genetic composition.

Hector's and Māui dolphin deaths occur as a direct result of commercial and recreational fishing due to entanglement or capture in gillnets or trawls. Death is ultimately caused by suffocation, although injury and sub-lethal effects can also result from the mechanical abrasion of fins resulting from entanglement. Since the 1970s, gillnets have been made from lightweight monofilament, which is difficult for dolphins to detect. Hector's dolphins are actively attracted to trawling vessels and can frequently be seen following trawlers and diving down to the net, which could result in the unwanted bycatch.

Deaths in fishing nets were previously considered to be the most serious threat (responsible for more than 95% of the human-caused deaths in Māui dolphins), with currently lower level threats including tourism, disease, and marine mining. Research of decreases in mitochondrial DNA diversity among hector's dolphin populations has suggested that the amount of gill-net entanglement deaths likely far surpasses that reported by fisheries. Population simulations estimated that the current population is 30% of the 1970 population size estimate of 50,000 dolphins, based on their estimated capture rate in commercial gillnet fisheries.

The first marine protected area (MPA) for Hector's dolphin was designated in 1988 at Banks Peninsula, where commercial gill-netting was effectively prohibited out to 4 nmi (7.4 km; 4.6 mi) offshore and recreational gill-netting was subject to seasonal restrictions. A second MPA was designated on the west coast of the North Island in 2003. Populations continued to decline due to by-catch outside the MPAs.

Additional protection was introduced in 2008, banning gill-netting within 4 nautical miles of the majority of the South Island's east and south coasts, out to 2 nautical miles (3.7 km) offshore off the South Island's west coast and extending the gillnet ban on the North Island's west coast to 7 nmi (13 km; 8.1 mi) offshore. Also, restrictions were placed on trawling in some of these areas. For further details on these regulations, see the Ministry of Fisheries website. Five marine mammal sanctuaries were designated in 2008 to manage nonfishing-related threats to Hector's and Māui dolphins. Their regulations include restrictions on mining and seismic acoustic surveys. Further restrictions were introduced into Taranaki waters in 2012 and 2013 to protect Māui dolphins.

The Scientific Committee of the International Whaling Commission has recommended extending protection for Māui dolphin further south to Whanganui and further offshore to 20 nautical miles from the coastline. The IUCN has recommended protecting Hector's and Māui dolphins from gill-net and trawl fisheries, from the shoreline to the 100 m depth contour.

The high levels of sex segregation and fragmentation of different populations in Hector's dolphin have been discussed as contributing to the overall population decline, as it becomes more difficult for males to find a female and copulate. The Allee effect begins to occur when a low-density population has low reproductive rates leading to increased population decline. In addition, low gene flow between populations may result from this species' high foraging site fidelity. Hector's dolphins have not been found to participate in alongshore migrations, which may also contribute to their lack of genetic diversity.

Samples from 1870 to today have provided a historical timeline for the species' population decline. Lack of neighboring populations due to fishery-related mortality has decreased gene flow and contributed to an overall loss in mitochondrial DNA diversity. As a result, the populations have become fragmented and isolated, leading to inbreeding. The geographical range has been lessened to the point where gene flow and immigration may no longer be possible between Māui dolphin and Hector's dolphin.

Potential interbreeding between Hector's and Māui dolphins could increase the numbers of dolphins in the Māui range and reduce the risk of inbreeding depression, but such interbreeding could eventually result in a hybridisation of the Māui back into the Hector's species and lead to a reclassification of Māui as again the North Island Hector's. Hybridisation in this manner threatens the Otago black stilt and the Chatham Islands' Forbes parakeet and has eliminated the South Island brown teal as a subspecies. Researchers have also identified potential interbreeding as threatening the Māui with hybrid breakdown and outbreeding depression.

All content from Kiddle encyclopedia articles (including the article images and facts) can be freely used under Attribution-ShareAlike license, unless stated otherwise. Cite this article:
Hector's dolphin Facts for Kids. Kiddle Encyclopedia.