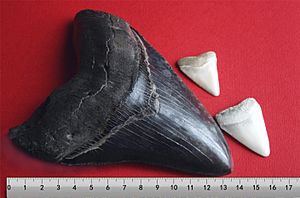 The great white shark (Carcharodon carcharias) is a species of shark. It is the world's largest living predatory fish. Mature sharks may grow up to 6.4 m (21 ft) in length and 3,324 kg (7,328 lb) in weight. There also have been a few reports of great white sharks measuring over 8 m (26 ft). This shark reaches its sexual maturity around 15 years of age. The lifespan of a great white shark may be as long as 70 years or more. Great white sharks can accelerate to speeds over 56 km/h (35 mph).

Great white sharks have about 300 teeth, arranged in many rows. The first two rows of the teeth are used for grabbing and cutting the animals they eat, while the other teeth in the last rows replace the front teeth when they are broken, worn down, or when they fall out. The teeth have the shape of a triangle with jags on the edges. Great white sharks are carnivores. The great white sharks is an apex predator. It hunts fish, seals, sea lions, seagulls, penguins, squid, octopuses, dolphins, small whales, crabs, shrimps, stingrays, sea turtles and other sharks.

The great white shark has no natural predators other than the killer whale. Some orcas have discovered they can paralyse the shark by flipping it upside-down. Then they hold the shark still with their mouth, and that suffocates it (sharks get oxygen by moving through the water).

The great white shark is one of nature’s most deadly carnivores, and is distinguishable by its jaws and many sharp teeth. The difference is the ability for both the shark’s jaws to move when ambushing its prey. It will first bite with the lower jaw to sink its teeth in, then closes the upper jaw and begins thrashing its head repeatedly to tear off chunks of flesh [1]. Its mouth may contain as many as 3, 000 teeth at one time, sitting in five rows with the largest set in the front. In the event a tooth is lost, another comes forward from a stash of backup teeth embedded in the shark’s jaws.

In addition to the teeth and jaws of great white sharks, their senses have greatly adapted to sharpen their skills as hunters. Their sense of smell is most accurate and great whites can detect a single drop of blood in ten billion drops of water. They possess an “ear stone” which helps the animal position itself in the water depending on the direction it is swimming. Sharks also utilize excellent vision with retinas divided into two areas for daylight and nighttime swimming, and protect them by rolling them backwards into the skull before biting. One of their most interesting senses relates to their touch and electro-reception. A series of pores in the shark’s nose allow them to detect electromagnetic fields and sense animal vibrations in the water, as well as accurately navigate through the open ocean.

The great white becomes an adult about nine years after its birth. The growth of the great white shark is about 25-30 centimetres per year and they grow to an average size of 4.5 meters. The largest can be as much as 6.4 meters in length. Their liver, a delicacy to killer whales, can weigh up to about 24 percent of its own body weight.

Great white sharks live in the sea. They live near the coast, in all warm waters. They occasionally make dives into the deep water of open oceans. They can be in water as shallow as three feet deep. The deepest scientists have seen a shark dive is about 1200 meters (4000 feet). That is down into the bathypelagic zone, where there is no sunlight.

They may swim near:

Research has shown that the sharks of northern California are genetically different to other shark populations. DNA evidence shows the population separated from other great whites about 200,000 years ago (during the Pleistocene Era). By tagging the sharks they also learned that they are generally alone, but follow the same route through the ocean, and stay in the same places. From January to July they live near Hawaii, and then move to Californian waters between August and December.

Sharks have been on Earth much longer than humans, which is one reason why humans are not part of their diet. Most scientists think sharks do not like the way humans taste.

Usually, the shark bites the human once and then swims away for a while. Sometimes the shark will bite off a leg or arm, but usually the bite is just a bite. Sometimes there is no tissue loss at all (nothing bitten off). Deaths in such cases are generally caused by loss of blood from the first wound. In cases where attacks have occurred and the victim has been unable to escape quickly, partial or whole consumption has occurred; lone divers are especially at risk of this. Scientists are not sure why this is but they have some ideas.

Sharks are very curious but they do not have whiskers or hands or tentacles like other animals. To learn more about an object, a shark has to either bump into it or bite it. Sharks' teeth and mouths are very sensitive. When sharks see a new object, for example, a surfboard, they bite it to know what kind of object it might be.

It is also possible that human behavior and shark behavior just don't match. In the 1980s, John McCasker proposed the Bite and Spit hypothesis. McCasker said that a shark will attack dangerous prey like an elephant seal by biting it once and then letting go. The shark then swims away to wait for the prey to bleed to death before going back to eat its body. But when a shark bites a human once, the human's friends come and help them out of the water. Maybe the shark would finish eating the human, but it does not get the chance. But sharks usually attack seal-sized (or human-sized) prey in one strong bite from underneath, so people are not sure if McCasker's idea is right.

All content from Kiddle encyclopedia articles (including the article images and facts) can be freely used under Attribution-ShareAlike license, unless stated otherwise. Cite this article:
Great white shark Facts for Kids. Kiddle Encyclopedia.