Sea lions are several pinnipeds from the family Otariidae (eared seals). They live all around the world, except in the Atlantic Ocean.

Male sea lions have thick fur around the face and neck, which sometimes looks like a lion's mane. That's how they got the name "sea lion". Some, like the Steller sea lion, can actually roar! Of course, these pinnipeds are not really lions at all, but they are mammals. Like lions, they have fur, breathe air, give birth to live young, and feed milk to their young. They also eat meat, though sea lions eat the meat of fishes, squids, and sea birds instead of land animals. Sea lions are also fierce fighters, just like lions. 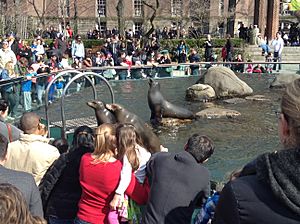 South American sea lions have been greatly impacted by human exploitation. During the late Holocene period to the middle of the twentieth century, hunter gatherers along the Beagle Channel and northern Patagonia had greatly reduced the number of sea lions due to their exploiting and hunting of the species and of the species’ environment. Although sealing has been put to a halt in many countries, such as Uruguay, the sea lion population continues to decline because of the drastic effects humans have on their ecosystems. As a result, South American sea lions have been foraging at higher tropical altitudes than they did prior to human exploitation. Fisherman play a key role in the endangerment of sea lions. Sea lions rely on fish, like pollock, as a food source and have to compete with other fisherman for it. When fishermen are successful at their job, they greatly reduce the sea lion’s food source, which in turn endangers the species. Also, human presence and human recreational activities can cause sea lions to engage in violent and aggressive actions. When humans come closer than 15 meters of a sea lion, the sea lions vigilance increases because of the disturbance of humans. These disturbances can potentially cause sea lions to have psychological stress responses that cause the sea lions to retreat, sometimes even abandon their locations, and decreases the amount of time sea lions spend hauling out. 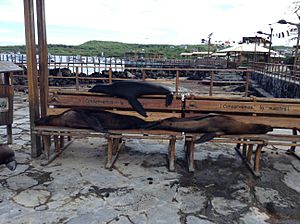 Sea lion attacks on humans are rare, but when humans come within approximately 2.5 meters, it can be very unsafe. In a highly unusual attack in 2007 in Western Australia, a sea lion leapt from the water and seriously mauled a 13-year-old girl surfing behind a speedboat. The sea lion appeared to be preparing for a second attack when the girl was rescued. An Australian marine biologist suggested that the sea lion may have viewed the girl "like a rag doll toy" to be played with. In San Francisco, where an increasingly large population of California sea lions crowds docks along San Francisco Bay, incidents have been reported in recent years of swimmers being bitten on the legs by large, aggressive males, possibly as territorial acts. In April 2015, a sea lion had also attacked a 62-year-old man who was boating with his wife in San Diego. The attack left the man with a punctured bone.

Sea lions have also been the main focus of tourism in Australia and New Zealand. One of the main sites to view sea lions is in the Carnac Island Nature Reserve near the Perth region of Australia. This tourist site receives over 100,000 visitors, many of which are recreational boaters as well as tourists come, who can watch the male sea lions haul out on to the shore. 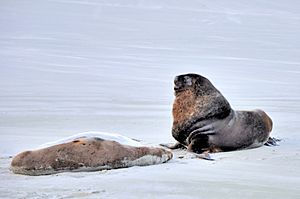 Otariids, or eared sea lions, raise their young, mate, and rest in more earthly land or ice habitats. Their rookeries populate with newborn pups as well as male and female otariids that remain to defend their territories. At the end of the breeding period males look for food while females remain for nurturing. Other points in the year consist of a mix of ages and genders in the rookeries with haul-out patterns varying monthly.

Steller sea lions, living an average 15 to 20 years, begin their breeding season when adult males behave by establishing territories along the rookeries in early May. The females arrive in late may. Births consist most usually of one pup with a perinatal period of 3 to 13 days.

All content from Kiddle encyclopedia articles (including the article images and facts) can be freely used under Attribution-ShareAlike license, unless stated otherwise. Cite this article:
Sea lion Facts for Kids. Kiddle Encyclopedia.