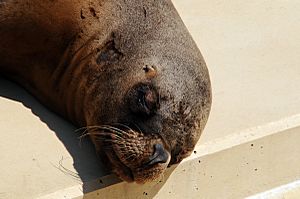 An eared seal or otariid or otary is any member of the marine mammal family Otariidae, one of three groupings of pinnipeds. They comprise 15 extant species in seven genera (another species became extinct in the 1950s) and are commonly known either as sea lions or fur seals, distinct from true seals (phocids) and the walrus (odobenids). Otariids are adapted to a semiaquatic lifestyle, feeding and migrating in the water, but breeding and resting on land or ice. They reside in subpolar, temperate, and equatorial waters throughout the Pacific and Southern Oceans and the southern Indian and Atlantic Oceans. They are conspicuously absent in the north Atlantic.

The words 'otariid' and 'otary' come from the Greek otarion meaning "little ear", referring to the small but visible external ear flaps (pinnae), which distinguishes them from the phocids. 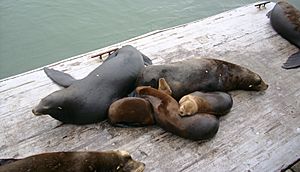 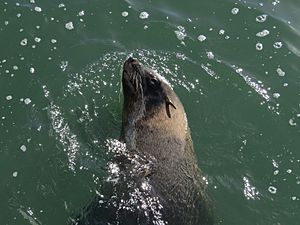 Eared seal off the Namibian coast.

Otariids have proportionately much larger foreflippers and pectoral muscles than phocids, and have the ability to turn their hind limbs forward and walk on all fours, making them far more maneuverable on land. They are generally considered to be less adapted to an aquatic lifestyle, since they breed primarily on land and haul out more frequently than true seals. However, they can attain higher bursts of speed and have greater maneuverability in the water. Their swimming power derives from the use of flippers more so than the sinuous whole-body movements typical of phocids and walruses.

Otariids are further distinguished by a more dog-like head, sharp, well-developed canines, and the aforementioned visible external pinnae. Their postcanine teeth are generally simple and conical in shape. The dental formula for eared seals is: 3.1.4.1-32.1.4.1. Sea lions are covered with coarse guard hairs, while fur seals have a thick underfur, which has historically made them the objects of commercial exploitation.

Male otariids range in size from the 70-kg (150-lb) Galápagos fur seal, smallest of all pinnipeds, to the over 1,000-kg (2,200-lb) Steller sea lion. Mature male otariids weigh two to six times as much as females, with proportionately larger heads, necks, and chests, making them the most sexually dimorphic of all mammals.

All otariids breed on land during well-defined breeding seasons. Except for the Australian sea lion, which has an atypical 17.5 month breeding cycle, they form strictly annual aggregations on beaches or rocky substrates, often on islands. All species are polygynous; i.e. successful males breed with several females. In most species, males arrive at breeding sites first and establish and maintain territories through vocal and visual displays and occasional fighting. Females typically arrive on shore a day or so before giving birth. While considered social animals, no permanent hierarchies or statuses are established on the colonies. The extent to which males control females or territories varies between species. Thus, the northern fur seal and the South American sea lion tend to herd specific harem-associated females, occasionally injuring them, while the Steller sea lion and the New Zealand sea lion control spatial territories, but do not generally interfere with the movement of the females.

Otariids are carnivorous, feeding on fish, squid and krill. Sea lions tend to feed closer to shore in upwelling zones, feeding on larger fish, while the smaller fur seals tend to take longer, offshore foraging trips and can subsist on large numbers of smaller prey items. They are visual feeders. Some females are capable of dives of up to 400 m (1,300 ft).

All content from Kiddle encyclopedia articles (including the article images and facts) can be freely used under Attribution-ShareAlike license, unless stated otherwise. Cite this article:
Eared seal Facts for Kids. Kiddle Encyclopedia.