Krill are small shrimp-like crustaceans about an inch or so long, found in all the oceans of the world. In areas with nutrients, they occur in huge swarms, with more than 10,000 krill per cubic meter. They feed on phytoplankton and to a lesser extent zooplankton.

Krill are ecologically very important, because they are near the bottom of the food chain. They make up the largest part of the diet of many animals. In the Southern Ocean, one species, the Antarctic krill, Euphausia superba, makes up an estimated biomass of over 500,000,000 tonnes (490,000,000 long tons; 550,000,000 short tons), roughly twice that of the human race.

They are eaten by many animals, including whales, seals, penguins, birds, fish, squid, and whale sharks. Of this, over half is eaten by each year, and is replaced by growth and reproduction.

Most krill species make large vertical migrations. They are distinguished from other crustaceans such as true shrimp by their externally visible gills. 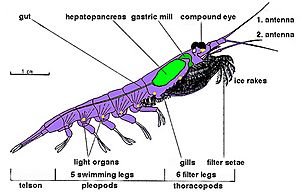 Most krill are bioluminescent. They have organs called photophores which emit light. The light is made by an enzyme reaction. Krill probably get this substance as part of their diet. Krill photophores are complex organs with lenses and focusing abilities, and can be rotated by muscles. The exact function of these organs is not known. The possibilities include mating, social interaction or as a form of camouflage to compensate for their shadow against the overhead light.

All content from Kiddle encyclopedia articles (including the article images and facts) can be freely used under Attribution-ShareAlike license, unless stated otherwise. Cite this article:
Krill Facts for Kids. Kiddle Encyclopedia.