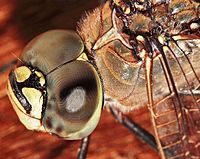 Compound eyes consist of many photoreceptor units or ommatidia. Each 'ommatidium' (singular) is an individual 'eye unit'.

The image perceived is a combination of inputs from ommatidia on a convex surface. Thus they point in slightly different directions.

Compared with simple eyes, compound eyes possess a wide-angle view. They can detect fast movement and, in some cases, the polarization of light.

Eyes with resolving power have come in ten fundamentally different forms, and 96% of animal species possess a complex optical system. Image-resolving eyes are present in molluscs, chordates and arthropods.

Almost all insects and arachnids use both simple and compound eyes.

Compound eyes, in arthropods at least, grow at their margins by the addition of new ommatidia.

Good fliers like flies or honey bees, or prey-catching insects like praying mantis or dragonflies, have specialized zones of ommatidia organized into a foveal area which gives acute vision. In the acute zone the eyes are flattened and the facets larger. The flattening allows more ommatidia to receive light from a spot and therefore higher resolution.

Another version is the pseudofaceted eye, as seen in Scutigera. This type of eye consists of a cluster of numerous ocelli on each side of the head, organized in a way that resembles a true compound eye.

The body of Ophiocoma wendtii, a type of brittle star, is covered with ommatidia, turning its whole skin into a compound eye. The same is true of many chitons.

All content from Kiddle encyclopedia articles (including the article images and facts) can be freely used under Attribution-ShareAlike license, unless stated otherwise. Cite this article:
Compound eye Facts for Kids. Kiddle Encyclopedia.