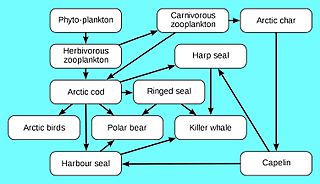 Arctic food web made up of a number of food chains

A food chain also represents a series of events and consumption in which food and energy are consumed from one organism in an ecosystem to another. Food chains show how energy is passed from the sun to producers, from producers to consumers, and from consumers to decomposes such as fungi. They also show how animals depend on other organisms for food.

In any ecosystem, many food chains overlap. Different food chains may include some of the same organisms. Several consumers may eat the same kind of plant or animal for food. When this happens, the food chain forms a food web. A food web shows how food chains are related within an ecosystem and how the cycles balanced between an equilibrium

All content from Kiddle encyclopedia articles (including the article images and facts) can be freely used under Attribution-ShareAlike license, unless stated otherwise. Cite this article:
Food chain Facts for Kids. Kiddle Encyclopedia.