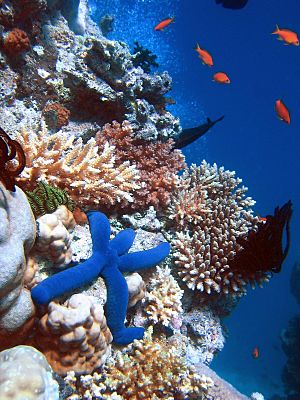 Rainforest ecosystems are rich in biodiversity. This is the Gambia River in Senegal

An ecosystem (or ecological system) is a large community of living organisms (plants, animals and microbes) in a particular area. The living and physical components are linked together through nutrient cycles and energy flows. Ecosystems are of any size, but usually they are in particular places.

Each ecosystem has its own community. An aquarium community, for example, can have small fish and other organisms. A desert community may have cacti, small snakes, and scorpions. A pond community can have frogs, insects, snakes, and plants, and a forest community may have rabbits, foxes and pine trees. The species in a community are divided into populations according to the particular habitats and ecological niches in the ecosystem. 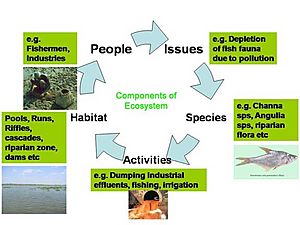 An example of an ecosystem

Ecosystems are stable, but changeable. They react to major changes in the environment, especially climate changes. For example, the major rainforests have lasted for a long time (perhaps 50 million years or more in some cases). As the rainfall and temperature changes, they change. We know that the Amazon rainforest shrank in size during ice ages, and expanded in the warmer periods.

What drives all ecosystems is the primary production. Primary production is the production of organic matter from inorganic carbon sources. This happens through photosynthesis. It drives the carbon cycle, which influences global climate via the greenhouse effect.

Through the process of photosynthesis, plants capture energy from sunlight and use it to combine carbon dioxide and water to produce carbohydrates and oxygen. The photosynthesis carried out by all the plants in an ecosystem is called the gross primary production (GPP). About 48–60% of the GPP is consumed in plant respiration. The rest is known as the net primary production (NPP). Total photosynthesis is limited by a range of environmental factors. These include the amount of light available, the amount of leaf area a plant has to capture light (shading by other plants limits photosynthesis), the supply of carbon dioxide and water, and suitable temperatures for carrying out photosynthesis.

Some of the major types of ecosystem:

A freshwater ecosystem in Gran Canaria, an island of the Canary Islands.

All content from Kiddle encyclopedia articles (including the article images and facts) can be freely used under Attribution-ShareAlike license, unless stated otherwise. Cite this article:
Ecosystem Facts for Kids. Kiddle Encyclopedia.