After in a forest fire: ecology changes after 1 year (left) and after 2 years (right)

Ecological succession, is the process by which a specific ecology has more or less orderly and predictably changed after a disturbance like a fire. In long-term studies, there is a species succession process in the way forests develop.

An example of Secondary Succession by stages:
1. A stable deciduous forest community
2. A disturbance, such as a wild fire, destroys the forest
3. The fire burns the forest to the ground
4. The fire leaves behind empty, but not destroyed, soil
5. Grasses and other herbaceous plants grow back first
6. Small bushes and trees begin to colonize the area
7. Fast growing evergreen trees develop to their fullest, while shade-tolerant trees develop in the understory
8. The short-lived and shade intolerant evergreen trees die as the larger deciduous trees overtop them. The ecosystem is now back to a similar state to where it began.

Successional dynamics beginning with colonization of an area that has not been previously occupied by an ecological community, such as newly exposed rock or sand surfaces, lava flows, newly exposed glacial tills, etc., are referred to as primary succession. The stages of primary succession include pioneer plants (lichens and mosses), grassy stage, smaller shrubs, and trees. Animals begin to return when there is food there for them to eat. When it is a fully functioning ecosystem, it has reached the climax community stage. For example, parts of Acadia National Park in Maine went through primary succession. 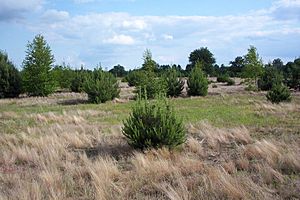 Unlike secondary succession, these types of vegetation change are not dependent on disturbance but are periodic changes arising from fluctuating species interactions or recurring events. These models modify the climax concept towards one of dynamic states.

Autogenic succession can be brought by changes in the soil caused by the organisms there. These changes include accumulation of organic matter in litter or humic layer, alteration of soil nutrients, change in pH of soil by plants growing there. The structure of the plants themselves can also alter the community. For example, when larger species like trees mature, they produce shade on to the developing forest floor that tends to exclude light-requiring species. Shade-tolerant species will invade the area.

Allogenic succession is caused by external environmental influences and not by the vegetation. For example, soil changes due to erosion, leaching or the deposition of silt and clays can alter the nutrient content and water relationships in the ecosystems. Animals also play an important role in allogenic changes as they are pollinators, seed dispersers and herbivores. They can also increase nutrient content of the soil in certain areas, or shift soil about (as termites, ants, and moles do) creating patches in the habitat. This may create regeneration sites that favor certain species.

Climatic factors may be very important, but on a much longer time-scale than any other. Changes in temperature and rainfall patterns will promote changes in communities. As the climate warmed at the end of each ice age, great successional changes took place. The tundra vegetation and bare glacial till deposits underwent succession to mixed deciduous forest. The greenhouse effect resulting in increase in temperature is likely to bring profound Allogenic changes in the next century. Geological and climatic catastrophes such as volcanic eruptions, earthquakes, avalanches, meteors, floods, fires, and high wind also bring allogenic changes. 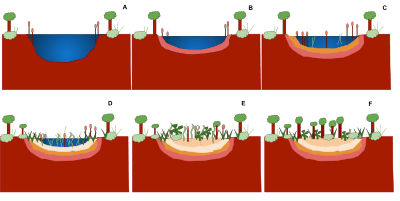 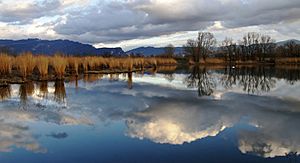 A seral community is an intermediate stage found in an ecosystem advancing towards its climax community. In many cases more than one seral stage evolves until climax conditions are attained. A prisere is a collection of seres making up the development of an area from non-vegetated surfaces to a climax community. Depending on the substratum and climate, different seres are found.

Succession theory was developed primarily by botanists. The study of succession applied to whole ecosystems initiated in the writings of Ramon Margalef, while Eugene Odum’s publication of The Strategy of Ecosystem Development is considered its formal starting point.

Animal life also exhibit changes with changing communities. In lichen stage the fauna is sparse. It comprises few mites, ants and spiders living in the cracks and crevices. The fauna undergoes a qualitative increase during herb grass stage. The animals found during this stage include nematodes, insects larvae, ants, spiders, mites, etc. The animal population increases and diversifies with the development of forest climax community. The fauna consists of invertebrates like slugs, snails, worms, millipedes, centipedes, ants, bugs; and vertebrates such as squirrels, foxes, mice, moles, snakes, various birds, salamanders and frogs.

All content from Kiddle encyclopedia articles (including the article images and facts) can be freely used under Attribution-ShareAlike license, unless stated otherwise. Cite this article:
Ecological succession Facts for Kids. Kiddle Encyclopedia.