The water cycle is the cycle that water goes through on Earth.

Water is essential for life as we know it. It is present throughout the Solar System, and was part of the Earth from its formation. The source of the water was the same as the source of the Earth's rock: the cloud of particles which condensed in the origin of the solar system. 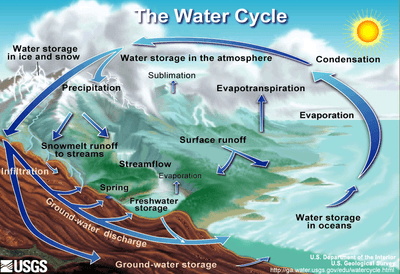 All content from Kiddle encyclopedia articles (including the article images and facts) can be freely used under Attribution-ShareAlike license, unless stated otherwise. Cite this article:
Water cycle Facts for Kids. Kiddle Encyclopedia.