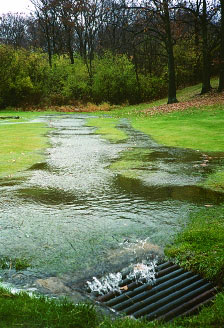 Runoff flowing into a stormwater drain

Surface runoff is the excess water that flows over land when the soil below it is flooded. This is a big part of the water cycle. 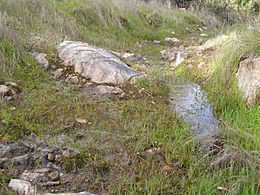 Surface runoff from a hillside after soil is saturated

Surface runoff can be generated either by rainfall, snowfall or by the melting of snow, or glaciers.

Snow and glacier melt occur only in areas cold enough for these to form permanently. Typically snowmelt will peak in the spring and glacier melt in the summer, leading to pronounced flow maxima in rivers affected by them. The determining factor of the rate of melting of snow or glaciers is both air temperature and the duration of sunlight. In high mountain regions, streams frequently rise on sunny days and fall on cloudy ones for this reason.

In areas where there is no snow, runoff will come from rainfall. However, not all rainfall will produce runoff because storage from soils can absorb light showers. On the extremely ancient soils of Australia and Southern Africa, proteoid roots with their extremely dense networks of root hairs can absorb so much rainwater as to prevent runoff even when substantial amounts of rain fall. In these regions, even on less infertile cracking clay soils, high amounts of rainfall and potential evaporation are needed to generate any surface runoff, leading to specialised adaptations to extremely variable (usually ephemeral) streams.

All content from Kiddle encyclopedia articles (including the article images and facts) can be freely used under Attribution-ShareAlike license, unless stated otherwise. Cite this article:
Surface runoff Facts for Kids. Kiddle Encyclopedia.