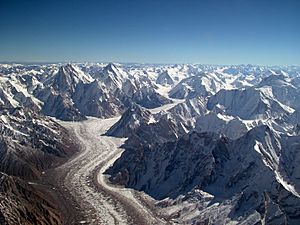 A glacier is a large body of ice and snow. It forms because the snow in an area does not all melt in summer. Each winter, more snow is added. The weight of all the snow creates pressure. This pressure turns the lower parts of the snow into ice. After this happens for many years, the glacier will start growing large. It becomes so heavy that gravity causes the ice to move. It flows downwards like water but very slowly. A glacier only moves about 50 metres (160 ft) per year. New snowfalls replace the parts that flow away.

Glaciers are the largest sources fresh water on Earth. The largest bodies of salt water are the Oceans 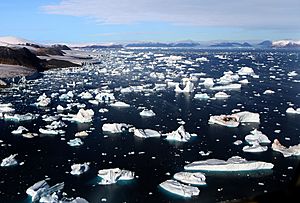 Glaciers will only form in places that are cold enough and get enough snow over time. This can take a long time. It often takes tens or hundreds of years for a glacier to form. There are two kinds of glaciers: continental glaciers and alpine glaciers. Alpine glaciers are also called mountain glaciers.

Glaciers are very important. They have a large effect on the environment. They do this because they are very large and heavy. When they move, they erode mountains and land. Also, since they froze long ago, snow crystals and air bubbles inside are kept in good condition. These can provide a large amount of information for scientists. Recently glaciers have been melting more than they did in the past. Many scientists think this is happening because global warming is changing the climate.

All content from Kiddle encyclopedia articles (including the article images and facts) can be freely used under Attribution-ShareAlike license, unless stated otherwise. Cite this article:
Glacier Facts for Kids. Kiddle Encyclopedia.