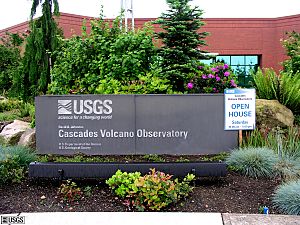 The scientists of the USGS study the landscape of the United States, its natural resources, and the natural hazards that threaten it. The organization has four major science disciplines: biology, geography, geology, and hydrology. The USGS is a fact-finding research organization. It has no power to regulate.

Administratively, it is divided into a Headquarters unit and six Regional Units. Other specific programs include:

The USGS Earthquake Hazards Program monitors earthquake activity worldwide. Its National Earthquake Information Center (NEIC) in Golden, Colorado detects the location and magnitude of global earthquakes. The USGS also runs or supports several regional monitoring networks in the U.S. under the umbrella of the Advanced National Seismic System (ANSS). The USGS informs authorities, emergency responders, the media, and the public, both domestic and worldwide, about significant earthquakes. It also maintains long-term archives of earthquake data for scientific and engineering research. It also conducts and supports research on long-term seismic hazards.

The USGS operates the streamgaging network for the United States, with over 7400 streamgages. Real-time streamflow data are available online. The motto of the USGS is "Science for a changing world."

All content from Kiddle encyclopedia articles (including the article images and facts) can be freely used under Attribution-ShareAlike license, unless stated otherwise. Cite this article:
United States Geological Survey Facts for Kids. Kiddle Encyclopedia.