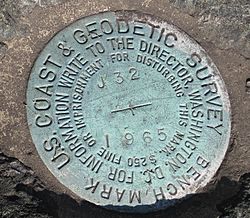 Closeup of a Geodetic Survey marker

National Geodetic Survey, formerly called the U.S. Coast and Geodetic Survey (U.S.C.G.S.), is a United States federal agency that defines and manages a national coordinate system. It measures the land and then draws maps. It also measures magnetic fields and tides. Congress started it in 1807 to draw maps of the coasts. It helps transportation and communication; mapping and charting; and a large number of uses of science and engineering. Since 1970, it has been part of the National Oceanic and Atmospheric Administration (NOAA), of the United States Department of Commerce.

All content from Kiddle encyclopedia articles (including the article images and facts) can be freely used under Attribution-ShareAlike license, unless stated otherwise. Cite this article:
U.S. National Geodetic Survey Facts for Kids. Kiddle Encyclopedia.