Connecticut is the southernmost state in the New England region of the northeastern United States.

Its capital city is Hartford, and its most populous city is Bridgeport.

The state is named for the Connecticut River, a major U.S. river that approximately bisects the state. The word "Connecticut" is derived from various anglicized spellings of an Algonquian word for "long tidal river".

Connecticut's first European settlers were Dutch. Initially, half of Connecticut was a part of the Dutch colony New Netherland, which included much of the land between the Connecticut and Delaware rivers. The first major settlements were established in the 1630s by England.

The Connecticut River, Thames River, and ports along the Long Island Sound have given Connecticut a strong maritime tradition which continues today. 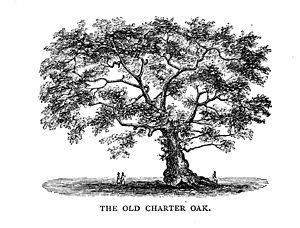 According to Webster's New International Dictionary (1993), a person who is a native or resident of Connecticut is a "Connecticuter". Commemorative stamps issued by the United States Postal Service with Connecticut themes include Nathan Hale, Eugene O'Neill, Josiah Willard Gibbs, Noah Webster, Eli Whitney, the whaling ship the Charles W. Morgan which is docked at Mystic Seaport, and a decoy of a broadbill duck.

Connecticut is bordered on the south by Long Island Sound, on the west by New York, on the north by Massachusetts, and on the east by Rhode Island. The state capital and third largest city is Hartford, and other major cities and towns (by population) include Bridgeport, New Haven, Stamford, Waterbury, Norwalk, Danbury, New Britain, Greenwich, and Bristol. Connecticut is slightly larger than the country of Montenegro. There are 169 incorporated towns in Connecticut. 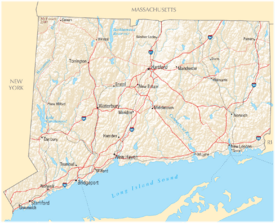 The highest peak in Connecticut is Bear Mountain in Salisbury in the northwest corner of the state. The highest point is just east of where Connecticut, Massachusetts, and New York meet (42° 3' N; 73° 29' W), on the southern slope of Mount Frissell, whose peak lies nearby in Massachusetts. At the opposite extreme, many of the coastal towns have areas that are less than 20 feet above sea level.

The coast of Connecticut sits on Long Island Sound, which is an estuary.

The Connecticut River cuts through the center of the state, flowing into Long Island Sound. The most populous metropolitan region centered within the state lies in the Connecticut River Valley. Despite Connecticut's relatively small size, it features wide regional variations in its landscape; for example, in the northwestern Litchfield Hills, it features rolling mountains and horse farms, whereas in areas to the east of New Haven along the coast, the landscape features coastal marshes, beaches, and large scale maritime activities.

Connecticut's rural areas and small towns in the northeast and northwest corners of the state contrast sharply with its industrial cities such as Stamford, Bridgeport, and New Haven, located along the coastal highways from the New York border to New London, then northward up the Connecticut River to Hartford. 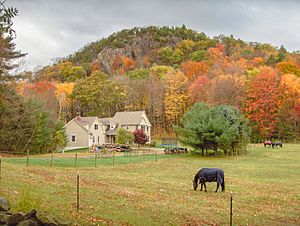 Scenery upon Barndoor Hills in Granby in autumn 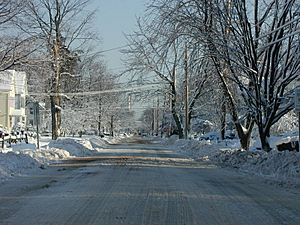 Thunderstorms are most frequent during the summer, occurring on average 30 times annually. These storms can be severe, and the state usually averages one tornado per year. During hurricane season, tropical cyclones occasionally affect the region.

Winters are generally moderately cold from south to north in Connecticut, with average January temperatures ranging from 38 °F (3 °C) in the coastal lowlands to 29 °F (−2 °C) in the inland and northern portions on the state.

Like other states on the East Coast, Connecticut has a rich and diverse amount of trees and plants.

Forests consist of a mix of Northeastern coastal forests of Oak in southern areas of the state, to the upland New England-Acadian forests in the northwestern parts of the state. Mountain Laurel (Kalmia latifolia) is the state flower, and is native to low ridges in several parts of Connecticut.

Rosebay Rhododendron (Rhododendron maximum) is also native to eastern uplands of Connecticut and Pachaug State Forest is home to the Rhododendron Sanctuary Trail, which contains some of the largest wild Rhododendrons found in the United States. Atlantic white cedar (Chamaecyparis thyoides), is found in wetlands in the southern parts of the state. Connecticut has one native cactus (Opuntia humifusa), found in sandy coastal areas and low hillsides. Several types of beach grasses and wildflowers are also native to Connecticut. 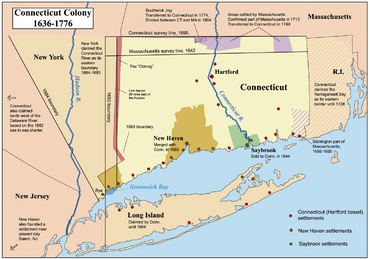 A map of the Connecticut, New Haven, and Saybrook colonies

The first European explorer in Connecticut was Dutch explorer Adriaen Block. After he explored this region in 1614, Dutch fur traders sailed up the Connecticut River (then known by the Dutch as Versche Rivier, "Fresh River") and built a fort at Dutch Point in present-day Hartford, which they called "House of Hope" (Dutch: Huis van Hoop).

The name "Connecticut" comes from the Mohegan Indian word "Quinnehtukqut". It means "Long River Place" or "Beside the Long Tidal River." The first explorer from Europe to come to Connecticut was Adriaen Block, from the Netherlands. After he explored this region in 1614, Dutch fur traders sailed up the Connecticut River (Named Versche Rivier by the Dutch) and built a fort near present-day Hartford, which they called "House of Hope" (Dutch: Huys de Hoop).

The first English settlers came in 1633. They were Puritans from Massachusetts, who were led by the Reverend Thomas Hooker. They founded the Connecticut Colony. Colonies were also established at Old Saybrook and New Haven, which later became part of Connecticut. Historically important colonial settlements included: Windsor (1633), Wethersfield (1634), Saybrook (1635), Hartford (1636), New Haven (1638), and New London (1646).

The western boundaries of Connecticut have been subject to change over time. According to a 1650 agreement with the Dutch, the western boundary of Connecticut ran north from the west side of Greenwich Bay "provided the said line come not within 10 miles [16 km] of Hudson River." On the other hand, Connecticut's original Charter in 1662 granted it all the land to the "South Sea," i.e. the Pacific Ocean. This probably added confusion to the early forefathers because the Pacific Ocean is located on the west coast of the United States. Agreements with New York, the "Pennamite Wars" with Pennsylvania over Westmoreland County, followed by Congressional intervention, and the relinquishment and sale of the Western Reserve lands brought the state to its present boundaries.

In the summer and fall of 2016, Connecticut experienced a drought in many parts of the state, causing some water-use bans. This affected the agricultural economy in the state. 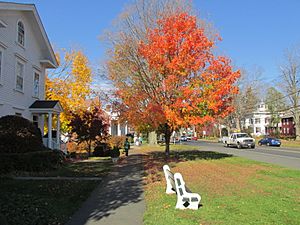 As of the 2010 U.S. Census, Connecticut's race and ethnic percentages were: 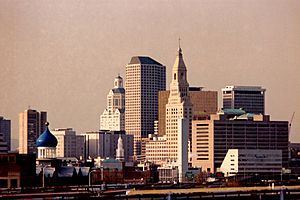 Connecticut used to be a center of gun manufacturing.

Connecticut's agricultural sector employed about 12,000 people as of 2010, with more than a quarter of that number involved in nursery stock production. Other agricultural products include dairy products and eggs, tobacco, fish and shellfish, and fruit.

Oyster harvesting was historically an important source of income to towns along the Connecticut coastline. In the 19th century, oystering boomed in New Haven, Bridgeport, and Norwalk and achieved modest success in neighboring towns. In 1911, Connecticut's oyster production reached its peak at nearly 25 million pounds of oyster meats. This was, at the time, higher than production in New York, Rhode Island, or Massachusetts. During this time, the Connecticut coast was known in the shellfishing industry as the oyster capital of the world. From before World War 1 until 1969, Connecticut laws restricted the right to harvest oysters in state-owned beds to sailing vessels. These laws prompted the construction of the oyster sloop style vessel that lasted well into the 20th century. The sloop Hope is believed to be the last oyster sloop built in Connecticut, completed in Greenwich in 1948. The Milford Oyster Festival, sometimes shortened to "Oysterfest," is an annual cultural festival held on the third Saturday of August throughout the city of Milford, Connecticut.

Between New Haven and New York City, the I-95 is one of the most congested highways in the United States. Many people now drive longer distances to work in the New York City area. This strains the three lanes of traffic capacity, resulting in lengthy rush hour delays. The state has encouraged traffic reduction schemes, including rail use and ride-sharing. 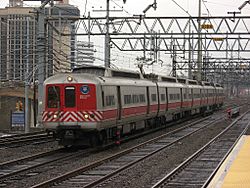 Connecticut also has a very active bicycling community, with one of the highest rates of bicycle ownership and use in the United States.

All content from Kiddle encyclopedia articles (including the article images and facts) can be freely used under Attribution-ShareAlike license, unless stated otherwise. Cite this article:
Connecticut Facts for Kids. Kiddle Encyclopedia.