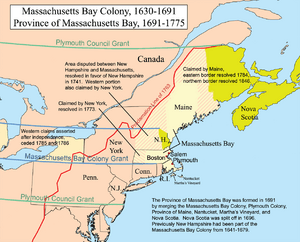 The Massachusetts Bay Colony was an English settlement founded in 1620 on the east coast of North America. The colony was later called New England and what is now the cities of Salem and Boston. The Bay Colony also included what is now known as the States of Massachusetts, Maine, New Hampshire, Rhode Island, and Connecticut.

John Winthrop, the founder of the Massachusetts Bay Colony, continued to work on the colony, and improve it any possible way. He knew that the Church of England was bad, so he decided to improve it at the New World; either colonizing the natives or getting rid of them.

There were two companies who brought settlers in the New World. The first company was the Dorchester Company but was a failure. The second company was in 1628 and called the Massachusetts Bay Colony. This was successful and brought approximately 20,000 people to the Colony.

The colony was doing well and made money trading with England. They also traded with the West Indies. In 1686 there was a civil war in England. King James II wanted to have total control over the colonies. After the war, the colonies remained the same until 1692. Then Sir William Phips arrived and Massachusetts Bay and the Plymouth Colony were combined. The colonists helped in the running of the government and how it would spend its money. 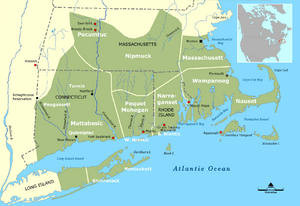 From the earliest times many Native American lived in this area. They farmed and hunted within their own land borders and did not cross each other's land. Early in the 1600s, explorers, Samuel de Champlain and John Smith made a map of the area.

Living in the New World was very hard work for the first settlers. Many became ill and died though the cold winter. There was not enough food, and the rest of the people decided to return to England after one year. For awhile there was no more talk of settling people in those parts. English ships did still come to the New England area for fishing and trading with the Indians.

In November 1620, a group of Europeans arrived and started Plymouth Colony. Other settlements were tried near there but they failed and the people either joined the Plymouth Colony, returned to England, or lived nearby the Colony.

The people of Plymouth faced many problems during the first years and could not pay back their investors. In 1627 the companies left the colonists to take care of themselves. Edward Winslow and William Bradford, two of its leaders, wrote about the Mayflower and the colony they created, called Plymouth Colony. It was published in England in 1622 called Mourt's Relation. The two men have different opinions but it was written to encourage people to come to the New World to live.

All content from Kiddle encyclopedia articles (including the article images and facts) can be freely used under Attribution-ShareAlike license, unless stated otherwise. Cite this article:
Massachusetts Bay Colony Facts for Kids. Kiddle Encyclopedia.