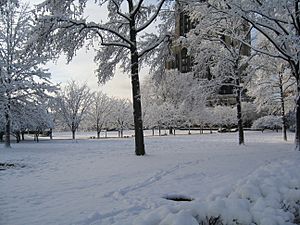 A park covered in snow during winter 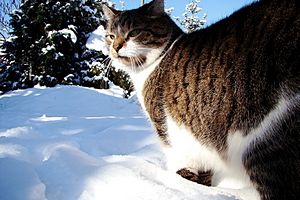 Winter is the coldest time of the year. It is one of the four seasons. Winter comes after autumn and before spring.

Some animals hibernate during this season. In temperate climates there are no leaves on deciduous trees in winter.

One of the winter holidays in the Northern Hemisphere Christmas.

The name comes from an old Germanic word that means "time of water" and refers to the rain and snow of winter in middle and high latitudes.

During winter in either hemisphere, the lower altitude of the Sun causes the sunlight to hit that hemisphere at an oblique angle. In regions experiencing winter, the same amount of solar radiation is spread out over a larger area. This effect is compounded by the larger distance that the light must travel through the atmosphere, allowing the atmosphere to dissipate more heat. Compared with these effects, the changes in the distance of the earth from the sun are negligible.

Animation of snow cover changing with the seasons 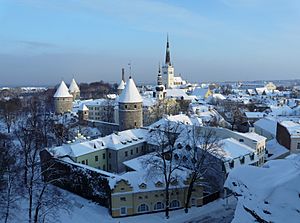 The Old Town of Tallinn, Estonia, full of snow on 1 January 2010

Winter is often defined by meteorologists to be the three calendar months with the lowest average temperatures. This corresponds to the months of December, January and February in the Northern Hemisphere, and June, July and August in the Southern Hemisphere.

Accumulations of snow and ice are commonly associated with winter in the Northern Hemisphere, due to the large land masses there. In the Southern Hemisphere, the more maritime climate and the relative lack of land south of 40°S makes the winters milder; thus, snow and ice are less common in inhabited regions of the Southern Hemisphere. In this region, snow occurs every year in elevated regions such as the Andes, the Great Dividing Range in Australia, and the mountains of New Zealand, and also occurs in the southerly Patagonia region of South America. Snow occurs year-round in Antarctica.

Astronomical and calendar based winter 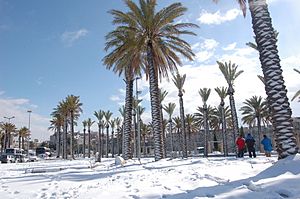 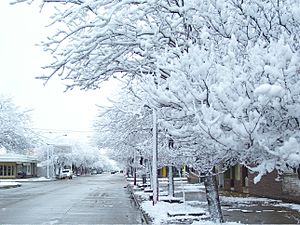 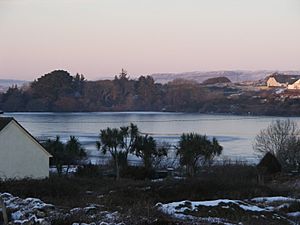 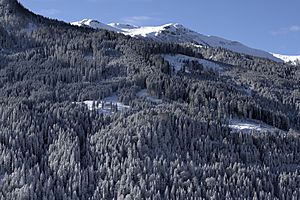 In the mid-latitudes and arctic, winter is associated with snow and ice 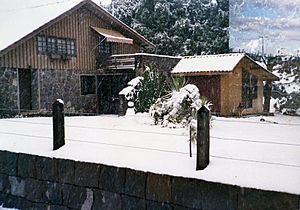 Snowfall in the southern highlands of Brazil, at São Joaquim town 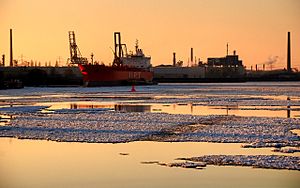 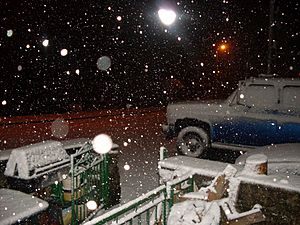 Heavy snowfall during the night in Pant Glas, Gwynedd, on 20 February 2010 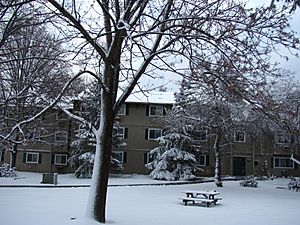 A morning after a cold night in the US

In the Northern Hemisphere, some authorities define the period of winter based on astronomical fixed points (i.e. based solely on the position of the Earth in its orbit around the sun), regardless of weather conditions. In one version of this definition, winter begins at the winter solstice and ends at the vernal equinox.

These dates are somewhat later than those used to define the beginning and end of the meteorological winter – usually considered to span the entirety of December, January, and February in the Northern Hemisphere and June, July, and August in the Southern.

Astronomically, the winter solstice, being the day of the year which has fewest hours of daylight, ought to be the middle of the season, but seasonal lag means that the coldest period normally follows the solstice by a few weeks.

In the USA and Canada (and sometimes in Britain) the season is regarded as beginning at the solstice and ending on the following equinox – in the Northern Hemisphere, depending on the year, this corresponds to the period between 21 or 22 December and 19, 20 or 21 March. In the UK, meteorologists consider winter to be the three coldest months of December, January and February. In Scandinavia, winter traditionally begins on 14 October and ends on the last day of February.

In many countries in the Southern Hemisphere, including Australia, New Zealand and South Africa, winter begins on 1 June and ends on 31 August.

In Celtic nations such as Ireland (using the Irish calendar) and in Scandinavia, the winter solstice is traditionally considered as midwinter, with the winter season beginning 1 November, on All Hallows, or Samhain. Winter ends and spring begins on Imbolc, or Candlemas, which is 1 or 2 February . This system of seasons is based on the length of days exclusively. (The three-month period of the shortest days and weakest solar radiation occurs during November, December and January in the Northern Hemisphere and May, June and July in the Southern Hemisphere.) 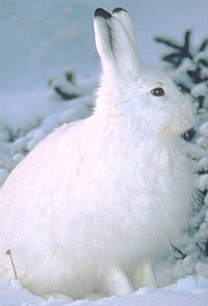 The snowshoe hare is one animal that changes color in winter

To survive the harshness of winter, many animals have developed different behavioral and morphological adaptations for overwintering:

Some annual plants never survive the winter. Other annual plants require winter cold to complete their life cycle, this is known as vernalization. As for perennials, many small ones profit from the insulating effects of snow by being buried in it. Larger plants, particularly deciduous trees, usually let their upper part go dormant, but their roots are still protected by the snow layer. Few plants bloom in the winter, one exception being the flowering plum, which flowers in time for Chinese New Year. The process by which plants become acclimated to cold weather is called hardening. 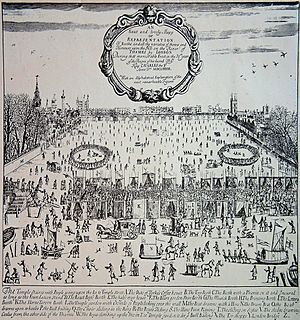 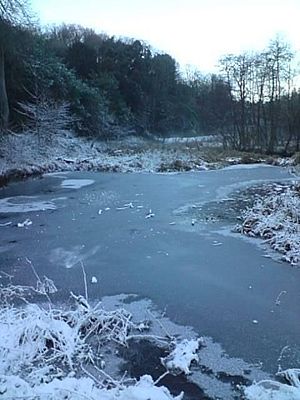 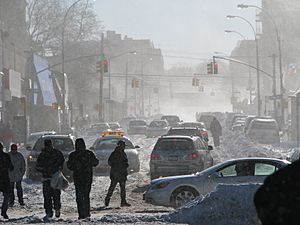 Humans evolved in tropical climates, and met cold weather as they migrated into Eurasia, although earlier populations certainly encountered Southern Hemisphere winters in Southern Africa. Micro-evolution in Caucasian, Asiatic and Inuit people show some adaptation to the climate.

All content from Kiddle encyclopedia articles (including the article images and facts) can be freely used under Attribution-ShareAlike license, unless stated otherwise. Cite this article:
Winter Facts for Kids. Kiddle Encyclopedia.