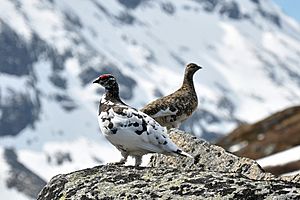 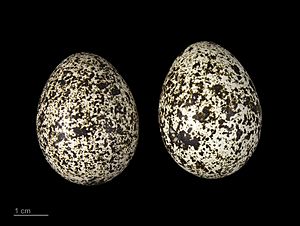 The rock ptarmigan (Lagopus muta) is a medium-sized gamebird in the grouse family. It is known simply as the ptarmigan in the UK and in Canada, where it is the official bird for the territory of Nunavut, Canada, and the official game bird for the province of Newfoundland and Labrador, Canada. It is known as the snow chicken in the United States. In Japan, it is known as the raichō (雷鳥), which means "thunder bird". It is the official bird of Gifu, Nagano, and Toyama Prefectures and is a protected species nationwide.

All content from Kiddle encyclopedia articles (including the article images and facts) can be freely used under Attribution-ShareAlike license, unless stated otherwise. Cite this article:
Rock ptarmigan Facts for Kids. Kiddle Encyclopedia.