Kids Encyclopedia Facts
This page is about the area in Wales. For other uses, see Gwynedd (disambiguation).

Gwynedd is an area in north-west Wales, named after the old Kingdom of Gwynedd. As a local government area, it is the second biggest in Wales in terms of geographical area and also one of the most sparsely populated. A majority of the population are Welsh-speaking. The name Gwynedd is also used for a preserved county, covering the two local government areas of Gwynedd and the Isle of Anglesey. Culturally and historically, the name can also be used for most of North Wales (for instance, the area covered by the Gwynedd Constabulary), roughly corresponding to the territory of the Kingdom of Gwynedd at its greatest extent. The current area is 2,548 square km (983.78 sq miles, slightly smaller than Luxembourg) with a population as measured in the 2011 Census of 121,874.

Gwynedd is the home of Bangor University and includes the scenic Llŷn Peninsula, and most of Snowdonia National Park.

In the past, historians such as J. E. Lloyd assumed that the Celtic source of the word "Gwynedd" meant "collection of tribes" - the same root as the Irish fine, meaning "tribe". Further, a connection is recognised between the name and the Irish Féni, an early ethonym for the Irish themselves, related to fían, "company of hunting and fighting men, company of warriors under a leader". Perhaps *u̯en-, u̯enə (strive, hope, wish) is the Indo-European stem. The Irish settled in NW Wales, and in Dyfed, at the end of the Roman era. Venedotia was the Latin form, and in Penmachno there is a memorial stone from c. AD 500 which reads: Cantiori Hic Iacit Venedotis ("Here lies Cantiorix, citizen of Gwynedd"). The name was retained by the Brythons when the kingdom of Gwynedd was formed in the 5th century, and it remained until the invasion of Edward I. This historical name was revived when the new county was formed in 1974. 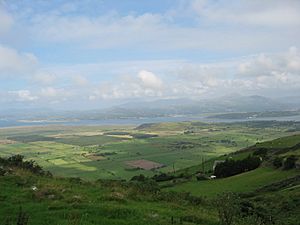 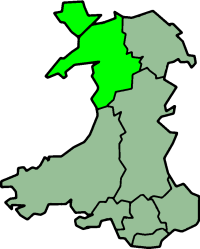 Gwynedd was an independent kingdom from the end of the Roman period until the 13th century, when it was conquered by England. The modern Gwynedd was one of eight Welsh counties created on 1 April 1974 under the Local Government Act 1972. It covered the entirety of the former counties of Anglesey and Caernarfonshire, and all of Merionethshire apart from Edeirnion Rural District (which went to Clwyd); and also a few parishes in Denbighshire: Llanrwst, Llansanffraid Glan Conwy, Eglwysbach, Llanddoged, Llanrwst and Tir Ifan.

The county was divided into five districts: Aberconwy, Arfon, Dwyfor, Meirionnydd and Anglesey.

The Local Government (Wales) Act 1994 abolished the 1974 county (and the five districts) on 1 April 1996, and its area was divided: the Isle of Anglesey became an independent unitary authority, and Aberconwy (which included the former Denbighshire parishes) passed to the new Conwy County Borough. The remainder of the county was constituted as a principal area, with the name Caernarfonshire and Merionethshire, as it covers most of the areas of those two historic counties. As one of its first actions, the Council renamed itself Gwynedd on 2 April 1996. The present Gwynedd local government area is governed by Gwynedd Council. As a unitary authority, the modern entity no longer has any districts, but Arfon, Dwyfor and Meirionnydd remain as area committees.

The Snowdonia National Park was formed in 1951. After the 1974 local authority reorganisation, the park fell entirely within the boundaries of Gwynedd, and was run as a department of Gwynedd County Council. After the 1996 local government reorganisation, part of the park fell under Conwy County Borough, and the park's administration separated from the Gwynedd council. Gwynedd Council still appoints nine of the eighteen members of the Snowdonia National Park Authority; Conwy County Borough Council appoints three; and the National Assembly for Wales appoints the remaining six. 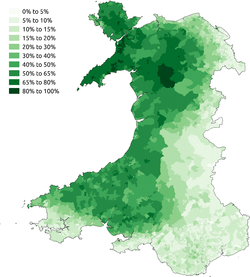 The proportion of respondents in the 2011 census who said they could speak Welsh.

All content from Kiddle encyclopedia articles (including the article images and facts) can be freely used under Attribution-ShareAlike license, unless stated otherwise. Cite this article:
Gwynedd Facts for Kids. Kiddle Encyclopedia.