Bethesda is a town and community on the River Ogwen and the A5 road on the edge of Snowdonia, in Gwynedd, north-west Wales. It is the 5th largest Community in Gwynedd.

It all started in 1823 when the Bethesda Chapel was built and the town grew around it. The chapel was rebuilt in 1840 and has now been converted into flats and is known as Arafa Don.

The town grew around the slate and stone quarrying industries; the largest of the local quarries is the Penrhyn Quarry. At its peak, the town was exporting its purple slate all over the world, and in doing so gained a reputation for being the world's best. The town was the site of a three-year strike led by the North Wales Quarrymen's Union from 1900. This led to the creation of the nearby village of Tregarth, built by the quarry owners, which housed the families of those workers who had not struck.

Most of the town is to the east and north east of the A5 road, with housing packed onto the hillside in irregular rows. This was due to the A5 marking the border between Lord Penrhyn's land, and the freehold land. This can still be seen in the layout of the current high street, where all the public houses are found on one side of the road.

In 1884 a branch of the London and North Western Railway's network from Bangor was opened. The line closed to passengers in 1951 and to freight in 1963.

These days the trackbed of the Penrhyn Quarry Railway towards Porth Penrhyn is taken over by the Lôn Las Ogwen cycle path.

In its heyday, the population of Bethesda peaked at 10,000; it is currently around 4,327 people (2001 census), there are also the villages of Rachub and Tregarth nearby. Current opportunities for employment in the town are limited: there are a few manufacturing businesses; most businesses are in the low-paid service sector and hospitality industry. For employment with higher earning potential, residents tend to commute to towns along the North Wales coast. Bangor is the most popular destination, but some will commute daily as far as Cheshire. Because of the lack of degree-based employment opportunities, many young people move out of the area to places such as Cardiff and Manchester as soon as they are qualified.

Zip World Velocity in Penryn Quarry is the longest zipline in Europe, at just over 1600 metres long, and brings the town hundreds of visitors. 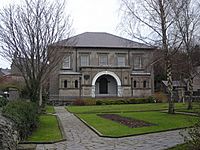 The architecture and layout of the town is largely utilitarian. Most of the buildings are constructed of stone with slate roofs. Some are constructed wholly of slate blocks, although such buildings tend to suffer from damp and structural slippage because the very flat and smooth surfaces of slate do not bind well to mortar.

The town has 40 Grade II listed buildings, including three pubs, in addition to the substantial and imposing Grade I listed Calvinistic Methodist Jerusalem Chapel.

The upper parts of Carneddi, Cilfodan and Tan y Foel owe more to stone quarrying on the nearby hills rather than slate quarrying that supported the lower end of the town. At the eastern limits, the town is bounded by the rising land of the Carneddau mountains which form some of the more remote landscapes of Snowdonia. Much of Bethesda once consisted of discrete villages such as Gerlan, Rachub and Braichmelyn; their names are retained as districts of the town.

Bethesda is noted for both the number of chapels (mostly dating from the 1904-1905 Welsh Revival) and pubs in the town. The town was named after the Bethesda Chapel, which was recently converted into residential flats.

Considered by some infamous for its pubs, there are no fewer than ten public establishments that serve alcohol in the Bethesda area (excluding Tregarth). It is noted throughout the surrounding area that the busiest night in Bethesda is Sunday, not the typical Saturdays or Fridays. One of the High Street pubs, the Douglas Arms, was named after the family which owned the nearby Penrhyn Quarry. Others include the Tŷ Isaf ("Lower House"), The Bull, The Kings Head, Y Sior ("The George"), The Victoria Arms, and the Llangollen.

Welsh is the dominant language of the town, and can be seen written and heard spoken in most settings. According to the United Kingdom Census 2001, 77.0% of the residents are Welsh-speaking, higher than the average for both Gwynedd and Wales as a whole.

The S4C series Amdani! (a play on words that can mean "go for it!" and "about her") was based on a fictitious women's rugby team in Bethesda, and many of the location shots were filmed in the area. The series was based on the novel of the same name, by Bethan Gwanas, who lived in the town at the time.

In June 2012 Tabernacl (Bethesda) Cyf., a non-profit co-operative based in the town, was awarded a grant of around £1 million to renovate Neuadd Ogwen, a performance venue on the High Street. It was due to reopen as a community arts centre in June 2013.

In the 1970s and 1980s Bethesda developed a reputation as a hub of musical creativity. Jam sessions and small home studios abounded alongside a burgeoning pub rock scene. As well as the now well-established 'Pesda Roc' festival, Bethesda has nurtured the Welsh language bands Maffia Mr Huws and experimentalists Y Jeycsyn Ffeif. In more recent years it continues to spring up bands from the local community such as Radio Rhydd.

All content from Kiddle encyclopedia articles (including the article images and facts) can be freely used under Attribution-ShareAlike license, unless stated otherwise. Cite this article:
Bethesda, Gwynedd Facts for Kids. Kiddle Encyclopedia.