Kids Encyclopedia Facts
Not to be confused with Historic counties of Wales.

The preserved counties of Wales are the current areas used in Wales for the ceremonial purposes of lieutenancy and shrievalty. They are based on the counties created by the Local Government Act 1972 and used for local government and other purposes between 1974 and 1996.

Certain statutes already in force were amended to include reference to them — as of 16 February 2011, the only remaining provisions still extant are:

The preserved counties were originally almost identical to the 1974–96 counties, but with a few minor changes in line with local government boundary changes: Llanrhaeadr-ym-Mochnant, Llansilin and Llangedwyn were transferred from Clwyd to Powys, and Wick, St Brides Major, Ewenny and Pentyrch were transferred from Mid Glamorgan to South Glamorgan. There were however two local government areas, Caerphilly and Conwy, split between preserved counties.

The boundary between Mid Glamorgan and Powys was further modified on 1 April 2010 to reflect the 2009 local government boundary changes in the Vaynor area. 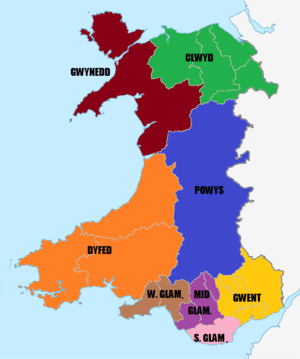 The population figures are mid-year estimates for 2007 from the Office for National Statistics, grouping component unitary authority area figures into their respective preserved counties.

All content from Kiddle encyclopedia articles (including the article images and facts) can be freely used under Attribution-ShareAlike license, unless stated otherwise. Cite this article:
Preserved counties of Wales Facts for Kids. Kiddle Encyclopedia.