Ceredigion is a county in Mid Wales. In the Middle Ages, it was a minor kingdom also known for a time as Seisyllwg. Following its Norman conquest, the name was anglicised to Cardigan and then Cardiganshire (Welsh: Sir Aberteifi) and it began to be administered as a county in 1282. The county had a population of 75,900 at the 2011 UK census. Its largest town, Aberystwyth, is one of the two administrative centres; the other being Aberaeron. Aberystwyth houses Aberystwyth University, Bronglais Hospital and the National Library of Wales. The inland town of Lampeter houses part of the University of Wales Trinity Saint David. Ceredigion is considered to be a centre of Welsh culture and more than half the population speaks Welsh.

The county is mainly rural with over 50 miles (80 km) of coastline and a mountainous hinterland. The numerous sandy beaches, together with the long-distance Ceredigion Coast Path provide excellent views of Cardigan Bay.

In the 18th and early 19th century, Ceredigion had more industry than it does today; Cardigan was the commercial centre of the county; lead, silver and zinc were mined and Cardigan was the principal port of South Wales prior to the silting of its harbour. The economy became highly dependent on dairy farming and the rearing of livestock for the English market. During the last century, livestock farming has become less profitable, and the population of Cardiganshire has been in decline as people moved to the more prosperous parts of Wales or emigrated to other countries. More recently, the population has started rising again as elderly people move into the county for retirement, and various government and European Union initiatives have encouraged tourism and other alternative sources of income.

Ceredigion has been inhabited since prehistoric times: 170 hill forts and enclosures have been identified across the county and there are many standing stones dating back to the Bronze Age. Around the time of the Roman invasion of Britain, the area was between the realms of the Demetae and Ordovices. The Sarn Helen road ran through the territory, with forts at Bremia and Loventium protecting gold mines near present-day Llelio. Following the Roman withdrawal, Irish raids and invasions were repulsed, supposedly by the forces under a northerner named Cunedda. The 9th-century History of the Britons attributed to Nennius records that Cunedda's son Ceredig settled the area around the Teifi in the 5th century. The territory supposedly remained a minor kingdom under his dynasty until its extinction upon the drowning of Gwgon ap Meurig c. 871, after which it was administered by Rhodri Mawr of Gwynedd before passing to his son Cadell, whose son Hywel Dda inherited its neighbouring kingdom Dyfed and established the realm of Deheubarth. The era—whose Viking invasions destroyed many monastic records—is highly obscure; some historians believe the Dyfed ruler Hyfaidd ap Bledrig may have annexed Ceredigion before his heirs lost it to Hywel through war.

Many pilgrims passed through Cardiganshire on their way to St Davids. Some came by sea and made use of the churches at Mwnt and Penbryn, while others came by land seeking hospitality at such places as Strata Florida Abbey. Both the abbey and Llanbadarn Fawr were important monastic sites of scholarship and education. Place names including ysbyty denote their association with pilgrims.

In 1282, Edward I of England conquered the principality of Wales and divided the area into counties. One of thirteen traditional counties in Wales, Cardiganshire was also a vice-county. Cardiganshire was split into the five hundreds of Genau'r-Glyn, Ilar, Moyddyn, Penarth and Troedyraur. In the 18th century there was an evangelical revival of Christianity, and non-conformism became established in the county as charismatic preachers like Daniel Rowland of Llangeitho attracted large congregations. Every community built its own chapel or meeting house, and Cardiganshire became one of the centres of Methodism in Wales with the Aeron Valley being at the centre of the revival.

Cardigan was one of the major ports of southern Wales, but its harbour silted in the mid-19th century and the Industrial Revolution largely passed the area by. In the uplands, wheeled vehicles were rare in the 18th century, and horses and sleds were still being used for transport. On the coast, trade in herrings and corn took place across the Irish Sea. In the 19th century, many of the rural poor emigrated to the New World from Cardigan, between five and six thousand leaving the town between 1790 and 1860. Aberystwyth became the main centre for the export of lead and Aberaeron and Newquay did brisk coastal trade. The building of the railway from Shrewsbury in the 1860s encouraged visitors and hotels sprang up in the town to accommodate them.

This area of the county of Dyfed became a district of Wales under the name Ceredigion in 1974 under the Local Government Act 1972, and since 1996, has formed the county of Ceredigion. According to the 2001 census, Ceredigion has the fourth highest proportion of Welsh speakers in the population at 61%; only Gwynedd, the Isle of Anglesey and Carmarthenshire have a higher proportion. 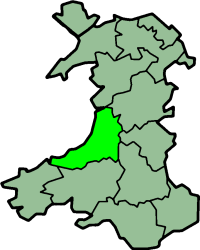 Ceredigion, as shown with traditional boundaries 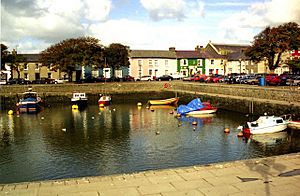 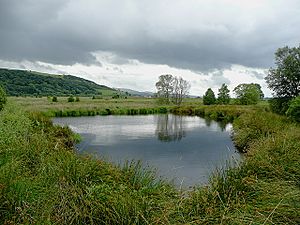 Ceredigion is a coastal county, bordered by Cardigan Bay to the west, Gwynedd to the north, Powys to the east, Carmarthenshire to the south and Pembrokeshire to the south-west. Its area is 1,795 square kilometres (693 sq mi). In 2010 the population was 76,938, making it the second most sparsely populated county in Wales.

The Cambrian Mountains cover much of the east of the county; this large area forms part of the desert of Wales. In the south and west, the surface is less elevated. The highest point is Pumlumon at 2,467 feet (752 m), other Marilyns include Pen y Garn and Llan Ddu Fawr. On the slopes of Pumlumon five rivers have their sources: the Severn, the Wye, the Dulas, the Llyfnant and the Rheidol, the last of which meets the Afon Mynach in a 300 feet (91 m) plunge at the Devil's Bridge chasm. The largest river is the River Teifi which forms the border with Carmarthenshire and Pembrokeshire for part of its length. The towns of Lampeter, Llandysul, Newcastle Emlyn and Cardigan are all in the Teifi Valley, and each has communities on each side of the river, in different counties. Other significant rivers include the River Aeron which has its estuary at Aberaeron, and the River Ystwyth and the River Rheidol both of which reach the sea in Aberystwyth harbour.

Ceredigion's 50 miles (80 km) of coastline has sandy beaches. In 2011 Ceredigion's beaches were awarded five Blue Flag Awards, four Green Coast Awards, and fourteen Seaside Awards. Ceredigion is one of only two places in the United Kingdom with a permanent presence of bottlenose dolphins. Another member of the fauna is the red kite; these may be seen in various localities in the county, but at the Red Kite Feeding Centre near Tregaron, they are fed each day, and large numbers congregate along with hungry crows and other birds.

Ceredigion had the largest population growth of any county in Wales, with a 19.5% increase from 1991 to 2003. Tourism and agriculture, chiefly hill farming, are the most important industries. In addition, two universities are within the county boundaries: Aberystwyth University and the Lampeter campus of the University of Wales, Trinity Saint David. The Welsh Plant Breeding Station is near Aberystwyth and linked to the University. The National Library of Wales, founded in 1907, is also in Aberystwyth. Ceredigion is an extremely rural county; the largest town, Aberystwyth, has fewer than 15,000 permanent residents and the remainder of the population of the county is scattered over 150 small towns, villages and hamlets.

The county has no large commercial areas. The nearest substantial settlements are located at least 1 hour 45 minutes drive away. Approximate road distances from Ceredigion's largest town, Aberystwyth, are: Swansea, 75 miles (121 km) to the south; Shrewsbury, 76 miles (122 km) to the east, in the English county of Shropshire; and Wrexham, 82 miles (132 km) to the northeast. The capital, Cardiff, is over 100 miles (160 km) from most parts of the county. Although Ceredigion and Gwynedd share a boundary, it is not possible to travel directly between the two by land as all road and rail links avoid the Dyfi estuary and pass through Dyfi Junction or Machynlleth in Powys.

Dylan Thomas lived in New Quay and Talsarn and frequented Aberaeron and Lampeter. The Dylan Thomas Trail runs through part of the county, linking the places associated with the poet. The Ceredigion Coast Path is a long-distance footpath following the coastline from Cardigan to Ynyslas, a distance of about 60 miles (97 km). It can conveniently be divided into seven sections and has some spectacular scenery.

Leisure activities available in the county include beach activities, rambling, cycling, sea fishing, canoeing, sailing and horse riding. Many of the towns and villages along the coast have small harbours and facilities for sailing, dolphin watching and other maritime activities. The River Teifi is a renowned salmon fishing river and also has a series of rapids near Llandysul where canoeing, kayaking and white water rafting take place. 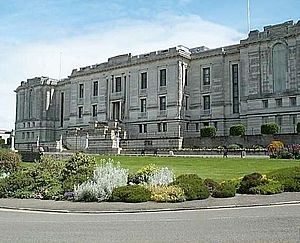 The county is rich in archaeological remains such as forts, earthworks and standing stones. Historic sites that can be accessed include Aberystwyth Castle and Cardigan Castle, as well as Strata Florida Abbey.

The National Library of Wales is at Aberystwyth and there is information on local history at the Ceredigion Museum, also in Aberystwyth. There is also the technical museum Internal Fire – Museum of Power, which is at Tan-y-groes near the coast road. Stately homes in the county open to the public include the Hafod Estate and Llanerchaeron. 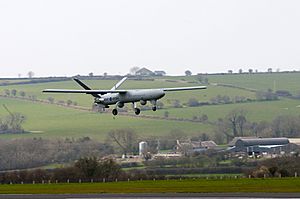 The Cambrian Line provides mainline railway services between Aberystwyth and Shrewsbury, where passengers can join services for London and elsewhere. Passengers can change at Dovey Junction railway station for trains to Pwllheli. There are no motorways in Ceredigion. The A487 coast road links Cardigan with Aberystwyth, passing close to Newquay and through Aberaeron, and the A44 goes eastwards from Aberystwyth to Rhayader, Leominster and Worcester. There are local bus services between the main centres of population, and long distance services between Aberystwyth and Cardiff. A bus service known as "Bwcabus" operates in the south of the county offering customised transport for rural dwellers.

There are no commercial airports but the West Wales Airport near the village of Aberporth is licensed for the deployment of civil and military unmanned aerial vehicles (UAV)s and is used for flying and testing these drones. There are no ports or ferry termini in the county but several of the coastal towns have facilities for yachts and small craft.

All content from Kiddle encyclopedia articles (including the article images and facts) can be freely used under Attribution-ShareAlike license, unless stated otherwise. Cite this article:
Ceredigion Facts for Kids. Kiddle Encyclopedia.