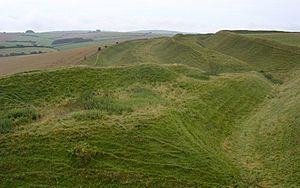 Maiden Castle is a hillfort in Devon, England. At the time, the ditches were deeper than they are now. There were also wooden pallisades 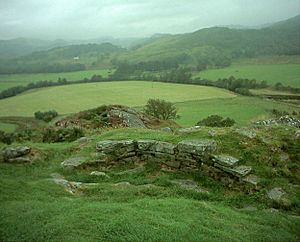 Dunadd hill fort near Kilmartin, in Scotland. This design is similar to the ring-forts in Ireland and the Castros in Spain

A hill fort is an ancient fortified refuge or defended settlement. It was usually in a place that rises from the surrounding area, given the name. This is done to exploit the rise for military advantage. The fortification usually follows the shape of the hill. Usually it is made of one or more lines of earthworks. There may also be stockades or defensive walls, and external ditches.Maiden Castle in Dorset is the largest of around 1000 hill forts built in Britain in the Iron Age. In a hill fort, the entrance through the inner ramparts had massive timber gates. The inner rampart was 14m high and topped by a fence of huge, upright timbers. It was faced with big, limestone blocks.

Hill forts were built since the Stone Age. They are most common during later periods though:

There are many different kinds of hill forts, they were very common. In Europe, the Celts used them for a very long time.

All content from Kiddle encyclopedia articles (including the article images and facts) can be freely used under Attribution-ShareAlike license, unless stated otherwise. Cite this article:
Hill fort Facts for Kids. Kiddle Encyclopedia.