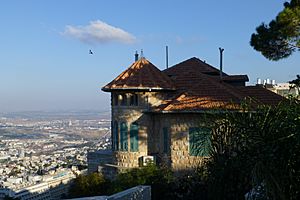 Settlement refers to the action of people coming together to live in an area. Settlement is a general term used in archaeology, geography, history and other subjects for a place where people live (either permanently or temporarily). When they come from far away it is sometimes called a colony. The term may include hamlets, suburbs, towns and cities. Nomadic people do not settle.

All content from Kiddle encyclopedia articles (including the article images and facts) can be freely used under Attribution-ShareAlike license, unless stated otherwise. Cite this article:
Human settlement Facts for Kids. Kiddle Encyclopedia.