Colonization and imperialism at the end of World War II (1945)

A colony is a place controlled by another country. The metropolitan state is the country that owns the colony. Now the phrase Dependent territory is used instead of colony.

A country which has many colonies is often called an empire. A colonist is a person from the metropolitan state who lives in a colony. 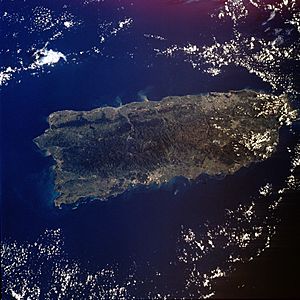 Puerto Rico, considered by some to be "the world's oldest colony"

Colonial means having to do with a colony. Colonial land is land that belongs to the colony. A colonist is sometimes called a colonial. The philosophy of having colonies is called colonialism. There must be many people to start a colony. There are many colonies, or countries that were once colonies, in the world. Most countries that were once colonies of Britain are part of the British Commonwealth.

All content from Kiddle encyclopedia articles (including the article images and facts) can be freely used under Attribution-ShareAlike license, unless stated otherwise. Cite this article:
Colony Facts for Kids. Kiddle Encyclopedia.